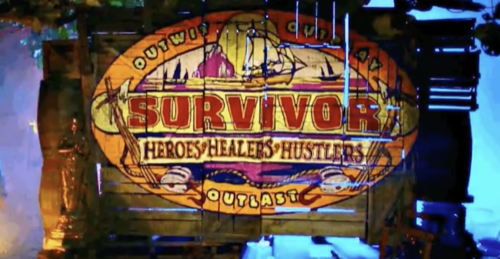 Tonight on CBS Survivor: Heroes vs Healers vs Hustlers airs with an all-new Wednesday, November 29, 2017, Season 35 Episode 10 and we have your Survivor recap below. On tonight’s Survivor season, 35 episode 10 called “Buy One, Get One Free,” as per the CBS synopsis, “Two more castaways are voted out of the game.”

Night 24 for the castaways and coming back from a crazy tribal council, the seven accomplished what they wanted to, vote out Cole. But the best part of the night was when Dr. Mike played an idol for no reason. At this point, Chrissy wants to vote out the last two remaining Healers, Joe & Mike. Meanwhile, Mike says he played his idol because he didn’t want to be the idiot who goes home with the idol in his pocket. Even Joe doesn’t understand why Mike played the idol.

Time for the reward challenge, the tribemates can only use their feet to build a block tower. The winner will be brought on a seaplane to enjoy delicious food and beer away from the island. The first step is to untie the rope and release pieces. Mike is leading with Lauren close behind him. Mike drops a piece and falls back. It’s now up to Lauren, she does it and wins individual reward. Lauren gets to choose someone to bring with her, she chooses Devon.

Then she gets to choose a second person, Ben and yet another, Ashley. Lauren picked the people to go with her strategically, Mike is frustrated back at camp, so he tries along with Joe to stir things up. Meanwhile, Chrissy and Ryan just keep talking about getting rid of Ben next. At the reward feast, Lauren admits why she choose everyone to be there with her – she wants to break up the numbers. Everyone starts talking about Ryan having an idol. Ben is sick of being called King Arthur and wishes he could get rid of Joe but will follow the group with Lauren. All of sudden, the reward group finds letters from home and everyone is reduced to tears. Ben goes frantic trying to find an idol when all of a sudden he sees something up in a tree and hits with a stick, its an idol. Ben knows how lucky he is and vows to tell nobody because they all can’t keep a secret.

Time for the Immunity Challenge, Lauren hands back her necklace. They have to balance on a triangular platform with their feet perched on very narrow foot holes. At regular intervals, they will have to move up making it very difficult. If at any point their hands touch the structure, or they fall off, they are out. Jeff offers that if they want to forgo the challenge and instead want to feast on peanut butter and chocolate, the choice is theirs.

Devon, Ben, and Lauren decide to drop out of the competition and indulge. J.P. is the first out, time to move into the final spot on the top level. Chrissy and Joe are out Ryan as well. It is up to Dr. Mike and Ashely. Mike is out, Ashley wins individual immunity and is safe at tribal council.

Back at camp, everyone is talking and Ryan is annoyed that Devon, Ben, and Lauren choose to eat and not compete. Chrissy is still confident in the 7 alliance, they want to get rid of Joe. Lauren wants to break up the 7 and vows that it’s going to go down at tribal council. Chrissy, J.P. and Ryan think they are in charge, a huge blindside is coming. At tribal council, time to vote and Ryan is up first.

Time to read the votes, nobody played an immunity idol. J.P. was voted out with five votes, three votes Mike and one vote Joe. Based on the shocked reactions, this was 100% a blind side. Back at camp, Chrissy is very upset about the blindside and wants info – nobody will give up anything. Ryan, on the other hand, congratulated everyone on the great move, but in reality, he is also furious. Ben is playing double agent and thinks he deserves an award for his performance.

At camp, Devon is happy because everything is becoming clear to him and he thinks he is finally calling the shots. Time for the reward challenge, everyone is going to randomly divide into two teams of four, go out to a boat, paddle to shore, grab three bags of logs along the way. They will then use those logs to push puzzle pieces through a tunnel. Once all the pieces are out, they will use the pieces to make a puzzle. The first four to complete the task will enjoy a Survivor spa; a shower, massage, eat lots of food and key lime and pecan pie.

Blue team (Ashley, Ben, Joe, and Devon) has all their puzzle pieces out first and start making their puzzle, they win. Ashley and Ben are thrilled with the way things are going in the game, everyone is enjoying the food and showers. Back at camp, Ryan is upset that he can’t win a challenge. Ryan now tries to work with Mike, he wants to get the numbers back on their side. Mike, on the other hand, is happy with his five and doesn’t want to work with Ryan.

Chrissy approaches Lauren and tries to strike a deal with her, but Chrissy is not interested. Day 30 and time for the immunity challenge, Ashley gives back her necklace. Today’s challenge is a word puzzle. Ben is first to be able to unlock his puzzle pieces.

Devon, Ashley and Ben are working on their puzzles, everyone else is struggling just to get their pieces. Chrissy looks like she figured it out, Devon looks at her and looks like they both figured it out. In the end, Chrissy wins individual immunity and is safe again at tribal council. Back at camp, everyone starts talking game. Devon’s alliance is going to vote out Joe. Devon tells Joe a story that they are going to vote out Ben, when in fact it is Joe heading home. Chrissy is campaign hard, she wants to get out Devon.

Ashley approaches Devon and tells him that she wants to flip and vote out Ben. Time for Tribal Council, Joe and Ben argue back and forth, both trying to discredit the other. Mike defends his alliance of five against Ryan’s old alliance of seven. Ryan says Tribal Council is like prom, you might be going with someone at the end of the night, you could be leaving with someone else.

Time to vote. Ryan decides to play his immunity idol, any vote cast for him will not count. Two votes Ashley, two votes Ryan, four votes Joe. Joe is eliminated and heading home. Two tribals in a row where everything isn’t the way it seems.