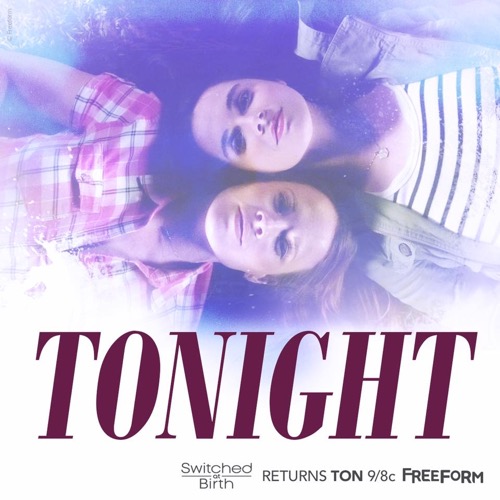 Switched At Birth returns to Freeform tonight with an all new Tuesday, January 31, season 5 premiere called “The Call,” and we have your Switched At Birth recap below. On tonight’s Switched At birth season 5 premiere episode as per the Freeform synopsis, “In the Season 5 premiere, Daphne (Katie Leclerc) and Bay (Vanessa Marano) receive an emergency phone call while in China and return home, where Daphne readjusts to campus life and Bay feels conflicted about her feelings for Emmett (Sean Berdy). Meanwhile, Kathryn (Lea Thompson) and John (D. W. Moffett) argue about her job; and Regina (Constance Marie) feels guilty about a secret romance.”

The show opens with Daphne and Bay running in the forest. Bay is barely conscious and is taken to the doctor. The doctor thinks Bay has Japanese Encephalitis and tells Daphne that 1 in 4 does not recover. Bay regains consciousness and asks Daphne to promise she won’t leave her.

The next scene is of Daphne and Bay at a party with the doctors thanking them for helping Bay to get better. The girl’s flight will leave in 2 days to return home so the girls say their goodbyes. However, Bay doesn’t want to leave and convinces Daphne to stay. Daphne gets a tattoo on her neck to match Bay’s and to celebrate the decision to stay in China. Bay nervously waits for Travis to arrive and breaks out a big grin when he finally arrives.

The next scene is 8 months later and shows John telling Kathryn she is beautiful. A group discusses their class project and then disburses but Regina asks Luka to stay and help her with her phone. They kiss.

Melody and Emmett talk about the adoption falling through. Emmett leaves to see his friends but not before his mom lets him know how proud she is of him. Bay and Travis kiss and he leaves to coach a ball team. Bay gets a call and rushes to Daphne’s side to declare they have to go home now.

Daphne, Bay and Travis return home and greet Melody and Emmett. They learn Emmett overdosed but he says it was all just a mistake and he is not using drugs. All three are angry at for Emmett for not taking the situation seriously and let him know he could have died. He walks away in anger and Travis feels like Hollywood Emmett is back. The group agrees that he will get the help he needs in the hospital.
John and Kathryn welcome the girls’ home.

John and Kathryn at first are shocked at the girl’s tattoos but love them once they realize together they mean fate. Over dinner Daphne says she plans to return to campus and take pre-med classes. Bay hopes to get a job in a tattoo parlor and continue pursuing her dream. Bay also says she plans to live with Travis. John puts his foot down and says no way. Kathryn and Regina both have no problem with them living together and Daphne suggestions the apartment above the Cracked Jug. John is out voted.

Daphne and Regina walk together on campus and Daphne assures Regina it is not strange being in college together. Luka joins them and Regina introduces Daphne. Daphne and Luka bond while talking about a band and Regina looks uncomfortable.

While Bay and Travis check out their new apartment they get a text from Melody asking that the come to the hospital quickly because Emmett is missing. Daphne returns to her old dorm where Mingo is now the RA. She hopes to get a room in the dorm and that she and Mingo can pick up where they left off. Unfortunately she strikes out on both fronts. There are no open rooms and Mingo is back with his ex-girlfriend.\

Daphne returns to her old dorm where Mingo is now the RA. She hopes to get a room in the dorm and that she and Mingo can pick up where they left off. Unfortunately she strikes out on both fronts. There are no open rooms and Mingo is back with his ex-girlfriend.

Melody can’t understand how Emmett walked out of the hospital without being stopped. She decides to drive around looking for him while Travis goes to the Chrome to see if he is there. Bay stays at the house in hopes he will come home. Bay calls Skye to see if she knows where Emmett might be. Skye tells Bay they broke up over 2 months ago and that things were not going well for Emmett in LA. His work was rejected by all of the film festivals and seemed depressed.

Bay tells Daphne she thinks she knows where Emmett is. Kathryn and John argue because John went around her to get funding for his program. She asks John to please support.

Regina and Luka talk and she tells him that now that her daughters are back she can’t see him anymore.

Bay and Daphne find Emmett and he apologizes for making them come home from China and for making the movie about what happened to them. He tells them something is wrong with him. He doesn’t feel like himself anymore. Emmett tells Bay he can’t stand seeing her with Travis and that he regrets breaking up with her. She asks him to stop talking.

Bay and Daphne talking about Emmett’s declaration and while Bay says she is happy with Travis she admits her heart leap at Emmett’s words. Daphne finds out she won’t get school credit for any of the work she did in China but Bay helps her see their time in China was not a waste because they experienced so many wonderful things together. Daphne decides to move into the apartment with Bay and Travis.

Melody tells Emmett that his uncle Hal committed suicide and that he was a lot like Emmett. She tells him that depression runs in the family but that therapy and medication can help.

When Bay tells Travis about Daphne moving into the apartment she tells him she things he should not live with them. He gets anger and says that is it obvious she still cares for Emmett.

Daphne does to a costume party at the dorms and it is obvious that she and Mingo still have a connection. Mingo is dressed as little Wayne and his costume causes to become angry. Daphne and Mingo post photos on social media which creates a barrage of comments about the costume being racist and white privilege.