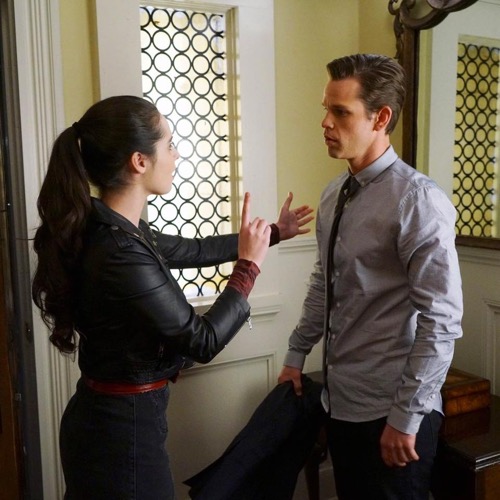 Switched At Birth returns to Freeform tonight with an all new Tuesday, February 14, season 5 episode 3 called “Surprise,” and we have your Switched At Birth recap below. On tonight’s Switched At birth season 5 episode 2 as per the Freeform synopsis, “Toby and Lily return from London with immediate plans to get married in the Kennish’s backyard, but a fight before the ceremony threatens their impending union. Meanwhile, Regina (Constance Marie) debates whether to reveal her relationship with Luca to her family; and Bay (Vanessa Marano) runs into Tank. (Max Adler)”

The show begins with Daphne and Bay getting ready for the day in their new apartment. Regina and Luka meet at the coffee shop and she tells him she is ready to tell her family about their relationship. As Bay waits for Travis she runs into Mary Beth and she ask how Travis is. Bay suggestions they do something together but Mary Beth says she is too busy. Bay tries to apologize for hurting her by dating Travis but Mary Beth angrily says that just need to move on.

Katherine and John get ready for Roby and Lily’s visit. They are very excited but they are also worried about Daphne. She has been down since the article appeared in the newspaper. Daphne and Bay tried to figure out how Bay can mend her friendship with Mary Beth. Daphne says Bay needs to give it time. Roby and Lily arrive and the whole family gathers to exchange gifts. They announce their engagement and say they are getting married that night.

Daphne completes an online class so she can officiate the wedding. Bay will be the best man. Bay complains of a stomachache and neck pain. Daphne freaks out because that is what happened right before Bay got sick in China. Bay tells her she is fine. Luca introduces himself to John and they bond over the grill. Luca stays to help decorate for the wedding.

Katherine and Toby sing to the baby. Lily returns as Toby starts to take the baby to work on his large motor skills but she tells him it is fine motor skills day. He looks anger and places a telephone call to a bookie to make a $10,000 bet. Bay stops by to drop off a birthday gift for Mary Kay but is shocked and runs away when she sees Tank in the room with Mary Kay.

Bay stops by to drop off a birthday gift for Mary Kay but is shocked and runs away when she sees Tank in the room with Mary Kay.

Mary Beth follows her and tries to explain about Tank. Bay asks how she can be with him after what he did to her. Bay says the only way they can be friend is if Mary Beth ends the relationship. Mary Beth refuses and Bay leaves in tears. Katherine and Lily play with the baby. Katherine says it must be hard with Toby gone so much but Lily says she has met a lot of good people in London. She also says the money is nice. Lily gets uncomfortable when Katherine asks about Toby and Lily’s relationship.

John points out all the things Daphne and Luka have in common obviously trying to get them to date. Luka is very uncomfortable. Daphne shares with him that she almost lost Bay in China and just lost her good friend Iris last week due to a fight. He thinks she may have PTSD but tells her to keep talking about how she feels.

John watches them talk and is excited about a possible romance between them. Regina joins John and he tells her he hopes Daphne and Luka will start to date. Regina tells him she and Luka are a couple. John is happy for her. Bay tells Travis that Mary Beth is dating Tank. He freaks out and leaves saying he has to try to stop May Beth from dating a rapist.

Toby watches the ballgame he bet on and his team loses. Just then Lily comes in and is angry. They fight that he is never home and never interacts with the baby. Toby says Lily never lets him spend time with their son because he does it “wrong”. He calls her Momzilla and says they should postpone the wedding for a few days. Lily refuses and says we are getting married NOW.

Travis finds Tank and Mary Beth. He tells her she is a horrible person for what she is doing and leaves. The wedding starts and Lily and Toby are obviously angry. Toby starts his vows but Lily stops him. She asks if they can just get it over with. They are pronounced husband and wife and Lily storms out before they kiss.

Toby and Lily talk and she admits she is controlling. She doesn’t know if she has what it takes to be a stay at home mom. He reports he has starting gambling again. They share their fears about their son and decide to get Toby help for his gambling. They end up laughing and kiss. Luka and Regina talk and he says Bay almost died in China. Regina and Katherine confront Bay asking why they weren’t told she was so ill. As they talk Daphne gets very upset about almost losing Bay and leaves in tears.

Bay follows and as they talk Tank appears. He tells Bay that Mary Beth’s mom is very sick. He apologizes for hurting Bay more than he already has. Regina tells Daphne that she is dating Luka. Daphne is happy for them. Bay visits with Mary Beth and is told her mom had a stroke. She shares that Tank has been a good friend to her and that they have a good relationship. John tells Katherine that Regina and Luka are a couple but she has to act surprised when Regina tells her.

Toby and Lily decide to stay in the US. Katherine and John support the decision and are excited to help with the baby. Bay shares what Mary Beth has been going through with Travis. He wants to spend the night with her but she says she has too much work to do. He leaves and then Emmitt texts that he needs to see Bay and she leaves immediately.