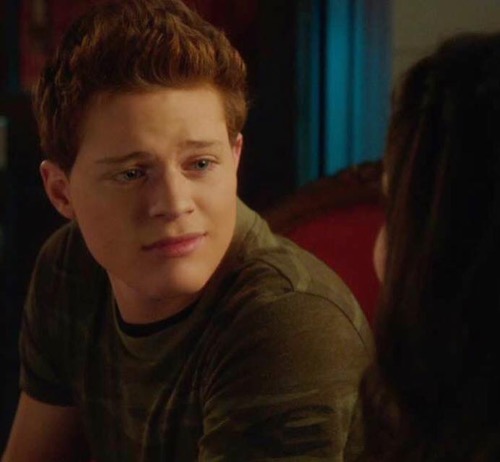 Switched At Birth returns to Freeform tonight with an all new Tuesday, February 21, season 5 episode 4 called “Relation of Lines and Colors,” and we have your Switched At Birth recap below. On tonight’s Switched At birth season 5 episode 4 as per the Freeform synopsis, “Daphne (Katie Leclerc) witnesses a racist display aimed at the Black Student Union on campus. Racial tensions worsen when those responsible are barely punished, leading Iris to partake in a hunger strike and Sharee to grow frustrated with the school’s lack of action. Meanwhile, Daphne (Katie Leclerc) receives an anonymous threat; and Bay (Vanessa Marano) helps Emmett with an art project, which causes friction with Travis.”

Emmitt asks Bay if he can take photos while she gives someone a tattoo for his photography class. She says no but then agrees to think about it. Daphne and Sharlee go for a run and Sharlee tells her she saw Iris and that she is going well. As they run past the Black Student Union they notice the lawn is covered in cotton balls. Daphne is horrified and tells Sharlee they have to do something. Sharlee says good luck but Daphne is on her own.

Bay and Roby clean out her room at home for the baby and she asks his advice if she should help Emmitt. He encourages Bay to talk to Travis about it. Daphne talks to the dean who says she will investigate what happened. The dean also tells her she is rethinking the college denying her credit for her work in China. The football coach peaks to Katherine about a new recruit for the team and says a major booster will be in town so they should wine and dine him.

Bay goes to talk to Travis about helping Emmitt but decides against it when she sees how stresses out he is. Travis is upset when he is told another guy will be starting the next game. Travis needs to keep working to get back his starter position. Bay’s agrees to allow her to tattoo Emmitt in the shop after hours.

Katherine and Regina talk about the upcoming dinner and her hesitancy in needing to wear a dress to impress the donor. Daphne runs into Isis and tells her about her talk with the dean. Isis tells her the police caught who did the cotton balls. The two students got a ticket for littering and a three day suspension. Daphne can’t believe that was the only punishment.

Isis tells Daphne that she and several other students are going on a hunger strike until the two boys are expelled from school. Daphne confronts the dean and can’t believe the college isn’t taking a stronger stand. Katherine has dinner with the donor who is a sexist pig. She struggles with his attitude. Daphne receives a threatening flyer on her car window. He dad says he is taking matters into his own hands to protect his daughter.

Katherine ends up tell the donor off. Bay and Emmitt talk about happy memories while she does his tattoo. He looks at her lovingly. Travis’ mom asks the baseball coach to give him a chance. The coach says he will let Travis and Chris fight it out for the starting position. Daphne runs into Iris and tells her they caught the person who put the threatening flyer on her car and he was expelled. Isis is angry because he was black. Isis shares how unsafe she feels on campus. Daphne finally understands and asks if she can join Isis to offer her support.

Travis comes to talk to his mom and sees Emmitt. They joke around and start to play a video game together but then Travis sees the tattoo and leaves in anger. Chris and Travis complete on the pitcher’s mound. Travis blows it and he and Chris get into a fight. The coach kicks Travis off the field. The football coach tells Katherine off for making the donor mad and losing the program money. Bay’s boss sees photos of the tattoo and is impressed. She leaves for lunch and Bay sees a sketch her boss has done that is the exact tattoo Bay did.

Travis confronts Bay about giving Emmitt the tattoo. He leaves before she can respond. Bay asks Emmitt why he told Travis. He says it was an accident. Bay tells him they can’t be friends while she is with Travis. Iris and her group speak on campus with a bullhorn. The dean approaches and tells them cannot camp out on campus for their own safety. The dean tries to grab the bullhorn and there is a struggle. Sharlee is arrested but the rest of the group continues to chant.