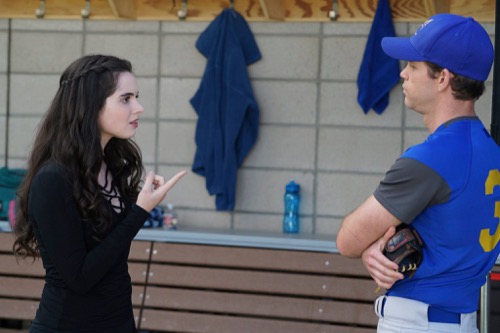 Switched At Birth returns to Freeform tonight with an all new Tuesday, February 28, season 5 episode 5 called “Occupy Truth,” and we have your Switched At Birth recap below. On tonight’s Switched At birth season 5 episode 5 as per the Freeform synopsis, “The Black Student Union take a stand against the university administration until their demands are heard. Iris continues her hunger strike until the students responsible for a racist display are expelled; Sharee gathers signatures and rallies students; and Chris is torn between playing in a game with baseball scouts and standing with his fellow students to show solidarity.”

Sharee meets with the Dean and Associate Dean. They bring up her experience at her last school and ask why she left. She offers a vague response. Sharee is told they do not want any more problems from her while she is a student on their campus. Iris works to organize the whole campus behind their cause. A group develops a list of demands from the campus administration. They decided to try to get 1000 signatures by 6pm the following night to get the school to review the list. They have a very slow start.

Bay meets Chris to drive him to see his aunt. Sharee asks Chris if he will sign the petition but he refuses. He says he has too much to lose if he signs her petition. The coach hears her and tells her she needs to leave. Regina offers Sharee support and she shares a story of the first time she experienced racism. Regina says it won’t be easy but it will be worth it.

Sharee is invigorated to start again. The group has 803 signatures but then Sharee arrives with 311 more signatures. She worked all night talking to students about their cause. They have enough to go to the administration. Iris hopes they get what they want because she is still not eating and it has been 3 days. Iris meets with a campus blogger and gives a great interview. The blogger reports that Iris’s father is white and that she was raised with money. The group confronts her and says she has hurt them all because of her interview. Iris is told she can’t lead the movement anymore.

The dean offers a response to the group telling them the school has done all they are going to do to the boys responsible for the cotton balls. The group begins chanting angrily and Iris passes out. Daphne and Sharee bring food to Iris but she refuses to eat. They tell her she is risking her health and her life. The doctor told her how serious this is but she still refuses. The group tries to decide what their next step should be. They decide to pull down the sign from the Sherman building because he was a slave owner. Each member of the group pulls off a letter as they tell of a time they have faced discrimination. The dean walks to her car and the group tries to talk to her but she says this is not the time or the place. Several in the group cry because they are so frustrated and don’t know what to do to be heard.

Chris is practicing his pitching and the coaches let him know scouts will on campus in the morning to see him. Sharee tells Chris he can’t play in the game tomorrow. If he refuses to play the school could lose a million dollars. The dean will have to meet with them if he refuses to play. Chris says no way. The dean and associate dean meet but the dean doesn’t want to take the issue to the university president.

Chris tries to unlock his bike but his key breaks off in the lock. As he tries to get his bike the campus police come and ask for his ID. He left it in the locker room and the police cuff him and begin to put him in the police car. Bay and Travis hear the commotion and tell the police Chris is a student at the school. The police let him go but Chris runs off very upset.

Keshawn brings flowers to Iris. He tells her his father worked his whole life trying to get ahead but he couldn’t because he was black. He tells her she has to start eating but she says she can’t. She has to show everyone how important this issue is. Chris tells the coach he can’t play. He is standing with the Black Student Union. He has to take a stand. The coach reminds him he needs to play for the scouts. He needs the money for his family. Chris says it is too important and he just can’t play. Chris asks the team to please stand with him. He shares with them what happened to him the night before with the police.

Travis stands with Chris and won’t play either. Slowly the other players also join Chris and refuse to play.
Coach also stands with his team but Peterson refuses to be bullied by the students and they forfeit the game killing their chances to go to the world series. All the other teams at the college also refuse to play. Iris gets a call from the university president. He has expelled the students responsible for the cotton balls and he wants to meet with the group in the morning.