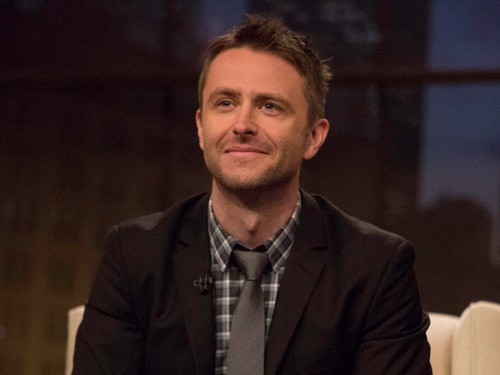 Tonight’s guests are Josh McDermitt (Eugene), Austin Amelio (Dwight) and Lil Jon. Hardwick calls it a great episode. He would love to see a stand-alone Eugene series. Josh feels like this episode is showing what Eugene was like pre-apocalypse. He has embraced his mullet.  The last time he worked with Austin he was biting his dong. Shooting a scene like that was hard. (Laughs erupt) Josh loves Austin to death.

Austin felt like Dwight’s scenes tonight were refreshing. It was nice to get some meaty stuff. How much can Dwight take? Austin says he isn’t numb to it. All the happy memories he had pre-apocalypse. Lil Jon hates the Easy Street strong. Austin hates it too!

In Memoriam, Drop It Like It’s Rot, Fat Joey’s Sandwich and Dr. Carson.

Denis Huth calls Dwight’s return home heartbreaking. If Sherry was there, he would have gone with her.

Austin thinks that Sherry and Dwight’s relationship could be what it once was. Josh thought it was great that Eugene grew a pair when he cut the line. He had to put himself out there in that moment that was great to see with so much confidence.

Lil Jon thinks they gave Eugene his own room because they need him and because he was easier to break down. Josh shares that there wasn’t anything special behind Eugene asking for lobster. It was not a Gimple Easter egg.

Greg Nicotero likes that Eugene can play a role, is he going to the other side? Josh loved when he read the script and he saw that Eugene ended up saying “I am Negan.”

Lil Jon doesn’t think Eugene betrayed the group. He is trying to fit in. Josh loved the small smirk Eugene gave when he walked away in the yard.

Austin thinks it was difficult for Dwight to get the doctor in trouble with Negan. He is making chess moves right now, it’s all part of the big picture. It was a savage move. Lil Jon compares Negan to the joker. These two main storylines are about Negan being lied to.

Lil Jon thinks that you have to figure out a way to get away from Negan. He would personally play it cool.

Josh thinks Eugene is lonely and he hasn’t had sex with another person. He may have built something.

Jeffrey Dean Morgan thinks there is a lot of laughing on the show because of the content of the show. Josh is hilarious on set. It’s hot and the pickle jar was sliding out of his hands. He is a funny guy!

Josh thinks Jeff is great. The casting crew finds the best actors that are great at their job and who also get along with everyone on the show.

A fan asks, was it actually Josh playing the videos games? No, Josh says. It was on a loop. He did practice on an Atari. Hardwick gives the fan all the things Eugene grabbed when he was in line.

Austin thinks the significance of Negan telling Dwight that Daryl is emotional because Dwight doesn’t have time to be. He needs to get right underneath Negan’s thumb.

Josh says that Negan’s wives killed it in this episode.

Morgan talks about when Eugene gives him the plan to make the walkers armored and stay standing. It’s an ingenious and Eugene is helpful.

Josh makes the science experiment that Eugene did in the episode. Hardwick, Lil Jon and Austin also make their own.

The sneak peek for next week shows…Rick breaks into a house with Michonne. They go through draws. They are making love.

Lil Jon has no idea what happened in the sneak peek. Josh thinks they are looking for Eugene. Hardwick makes a joke that Eugene was the catalyst for sex.