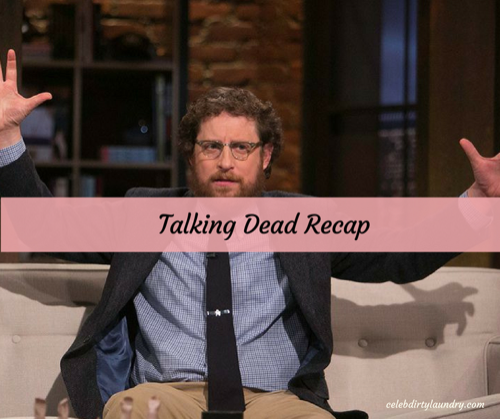 Karl Mackinen, Scott Gimple and Michael Rooker are tonight’s guest stars. Karl explains his audition scene. They asked him if he could ride a horse. He doesn’t like riding them. He had a bad past experience. The fans are on board with his character except for when his character messed with Carol and Daryl. Scott explains that Richard’s character was written to be justified, he had his reasons. They didn’t want to show and share all of the reasons right up front.

Rooker liked seeing Morgan crack up. His insanity makes him more human. Merl’s animal sidekick would have been a rhino. Gimple previously said the same thing. Rooker thinks Merle would approve of Daryl’s life and choice so far.

Who Done It walker, Carol and a road sign sitting in a tree, Benjamin and Richard

Ezekiel (Khary Payton) will miss Richard and working with him on set. Love his some Carl. Carl explains that the Kingdom people would always go out and eat together.

Scott explains that Morgan killed Richard with bare hands out of rage. Rooker thinks that the scene was much like real life – no one intervened. Morgan may have killed Richard but he accomplished what Richard wanted. Karl explains that the scene was sad to act out. He recalled Morgan’s hardships. Lennie is a great actor. Rooker liked the flashbacks.

Rooker thinks Merle was misunderstood. He thinks Merle would have to tried to take down Negan. Unless Negan had something good to offer.

Lennie James live from the UK. It is 3 am there. He reads the script over and over. He agrees with what Morgan is trying to do. Morgan is trying to make killing the last thing they have to do. He thinks that Benjamin’s death was such a blow because it reminded him of his son. He was upset because he was allowed to live an ideal life in the Kingdom, but Richard took that away. Scott says it is difficult to write these scenes.

Carl is going to miss working with Lennie because he is such a great actor. He begged Lennie to let him shine in his scene even though he didn’t have any dialogue.

Lennie thinks Morgan tells Carol because he has come to say goodbye  – he is going to kill every single one of them.

Payton knows that Ezekiel will feel the loss of Benjamin. There are going to be consequences.

Scott explains that he made a snippet of Morgan to music to drive himself crazy while writing the scenes. Merle has a poster he wants to share with the audience. As well as a soundtrack for the movie he is in – The Belko Experiment.

Behind the scenes of Carol’s street sign fighting – Carol is in a tree, killing in slow motion with a retractable tip.

Rooker agrees with Morgan. He should have told Carol.

Bob from Chattanooga calls in – Gimple shares that Morgan cannot take his own life. He can’t.

Sneak peek of the week – Rosita lights a rag on fire and lights up a car as walkers approach. They climb the fence.