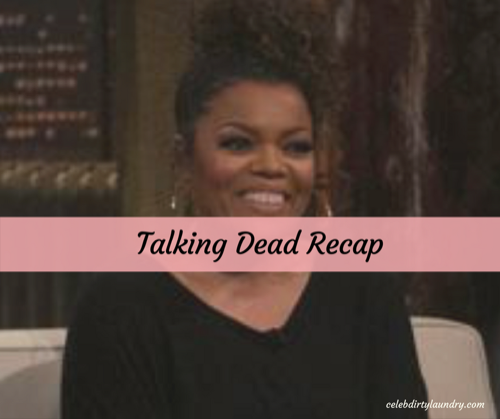 Yvette Nicole Brown is thrilled that no one died in tonight’s episode. She explains how she found the beginning of season 6 a little dark for her. She says now that we saw Daryl Dixon (Norman Reedus) escape we are finally getting sunshine, unicorns and rainbows.

Denise agrees that the first part of the season was dark, but all of them, especially Rick was in a state of shock, when Glen and Abraham were executed; in a sense feeling like he participated in it by not being able to do anything. They discuss the moments when Rick Grimes (Andrew Lincoln) talks to Michonne (Danai Gurira) about how Glen saved him but he couldn’t save Glen.

They joke about this being the most romantic episode, really going along with the theme ‘Rise Up’. Yvette says he is very naughty; as he jokes about eating chili mac and cheese.

Yvette talks about the Carnival scene, where it looked like Rick was eaten, which reminded her of the moments of Glen and the dumpster. She felt it was like the show was reliving some vital moments from the past few seasons.

Denise shares it was clearly at a school, and the carnival was going on when the world fell apart, but since there were soldiers with guns there it must have been a camp of some sort. Michonne acknowledges it was a battle ground; that there was a war there, whether it was people versus people or soldiers versus walkers.

The Walking Dead fans have waited a long time to see the chemistry explode between Rick and Michonne and tonight they were able to enjoy a great deal of it: Romance during the Zombie Apocalypse!

Michonne and Rick’s love… proves one thing. The couple that slays together…. Stays together.

Andrew Lincoln (Rick) shares that the show wanted to explore their sweetness with each other and their humor together; and what they draw out of each other. Its a dream time for Rick who is on a sexy bold road trip he never wants to end.

Chris Hardwick said it was nice to see that so many characters were smiling; he asks if they are now married and Yvette says for sure and this was their honeymoon. Rick says he didn’t want to lead unless he was doing it with her by his side; but he is trying to enjoy the moment for as long as they can – stay in a bubble.

They joke that Michonne killed 8 walkers but Rick killed 2. Yvette explains that she is Rick’s safety net, where he can help everyone and she takes his back. At the carnival they didn’t want to do it, but they needed the guns.

Chris asks how do they think Michonne and Laurie would have gotten along; but all feel Michonne won’t have stepped into the middle of that, but Rick would have left Laurie for her because he never felt settled with Laurie.

Rick and Michonne have great trust and respect for each other. Chris talks about Rick going to see her dad…. Joking that Judith doesn’t look anything like Rick; but Rick does feel that Judith is Shane Walsh’s (Jon Bernthal) daughter and not his.

Dania Gurira (Michonne) shares that the scenes where she thought Rick died, it felt like her brain couldn’t compute it, and the scariest thing was when she dropped her sword because it goes against everything we know about Michonne; she would never leave herself defenseless like that. She drops the sword in the sense that she was not going on without him, that was the deal they made. She doesn’t have a response other than to let go.

The question is: being in a relationship during the apocalypse, is it s hindrance or a good thing? Rick and Michonne are the new reality for couples, they need to be prepared to live without the other.

Some fans are on their twitter complaining that they just couldn’t have one full day of happiness. Chris also clears up that it was a walker who got stuck and it was an accidental shooting.

The question is are Rosita (Christian Serratos) and Sasha (Sonequa Martin-Green) wrong to go after Negan alone? Yvette say its dumb because everything they are doing is killing people and 93% of those who voted feel they are wrong.

Andrew says that Michonne on tonight’ episode was badass. She was kebobing several heads at once, while Ricky Dicky Grimes pulled one out of the windshield. He jokes that anything at Rick’s expense is funny. They had to think of a way that would make it the most difficult for Rick to steal the car, and ripping the walker apart piece by piece was at his expense.

Inside the Dead Info:

Tonight was the first time a walker fired a gun. Rick and Michonne were repeated doused with water at the start of each take, they got revenge on Greg Nicotero by dousing him at the end of the completed scenes.

Rick was giving that walker the agony of defeet!!

Yvette says the recent episode with Daryl asking Carol why she left, made him sound like a little boy but in her mind they will be together. She is a huge Carol fan and has hopes for them still.

Jill Robi and Brandenn Orban-Griggs, they are an actual couple who met at the premiere in the cemetery. They are considered the ultimate fans of The Walking Dead.

Next week’s preview shows lone wolf Carol killing several walkers and demands to know where Morgan (Lennie James) is. The guests will be Lennie James, Scott Gimple and Michael Rooker and a surprised cast member.

Be sure to tune into AMC’s The Walking Dead followed by Talking Dead. Check CDL often for updates and news!