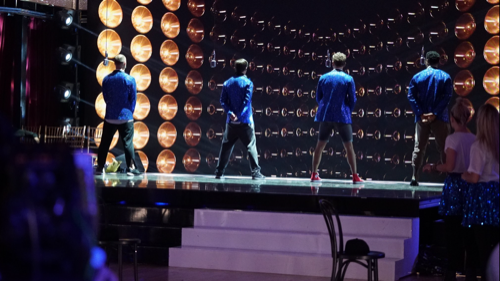 Tonight on ABC the highly anticipated Team Dance returns to the ballroom as Dancing With The Stars returns for the sixth episode of season 24 and it is Boy bands and Girl groups Night. Team #BoyBand consisting of: Bonner Bolton, Nick Viall, David Ross and Rashad Jennings will dance to a medley of “Dancing Machine” by Jackson 5, “You Got It (The Right Stuff)” by New Kids on the Block and “Best Song Ever” by One Direction.

Judge’s comments Team Boy Band: Len: That was full of gimmicks and crowd pleasing moves and that’s what you gotta do if you are going to beat the girls. It was plenty of fun. Bruno: Each and every one is ready to go solo. It was the most fabulous mess I have ever seen, I was literally crying, than you very much. Carrie Ann: You guys were fantastic, my favorite part was the group session, that Magic Mike session you guys did pay off. There was one person that missed their staging, Bonner, but I didn’t expect it to be so good. Nick. Get the record deal going, let’s record some music, you guys missed your calling. You guys were great, I loved it.