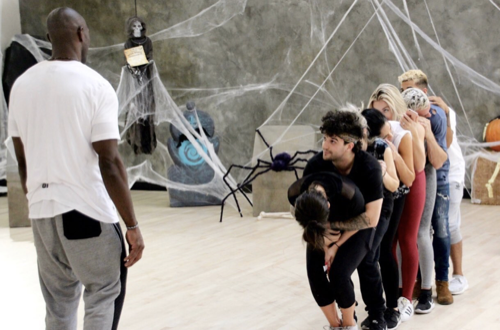 On tonight’s episode as per the ABC synopsis, “the celebrities, and their pros will be grouped into two teams with each performing a dance to celebrate All Hallow’s Eve. The two team captains were chosen because they had the lowest cumulative scores across the season, and they were given the chance to pick their teams in order to help boost their rankings with both the judges and viewers. The team dance scores will be combined with the celebrity’s individual dance scores for a final tally.”

Judges Comments: Everyone is on their feet as the team gathers for Judges’ comments. Len: Has a hard time eating corn on the cob because it is messy and for me, this was a bit messy. (Everyone boos). There was too much wheeling and dealing. It was a bit broken up for me. Bruno: You made an interesting choice because it is almost impossible to keep all the kicks and lifts in time with 8 people. It lost a lot of the sync and were much better individually but in the group number, you lost the sync. Carrie Anne: it feels like you all under danced, in order to match each other, which was disappointing. The corn mazes it made your dance really small and because of that it didn’t engage me as an audience and it didn’t come together like you hoped.  Scores: Carrie Anne: 8 Len: 8 Bruno: 8 Total: 24/30