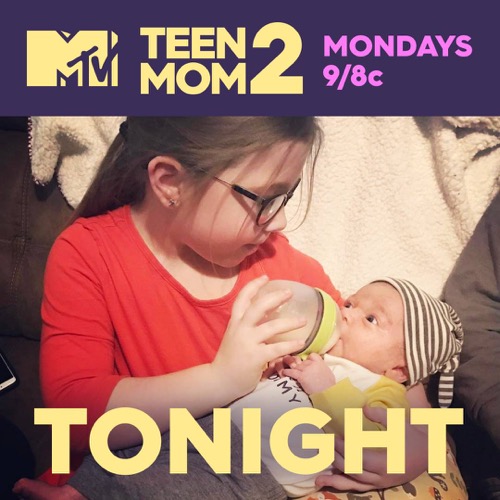 Tonight on MTV Teen Mom 2 returns with an all-new Monday, July 17, 2017, episode and we have your Teen Mom 2 recap below. On tonight’s Teen Mom 2 Season 8 premiere as per the MTV synopsis, “Briana reunites with an old friend, but grapples with an unplanned pregnancy. A sudden move tests Jenelle and David’s relationship. Kailyn and Javi finalize their divorce, while Leah begins an exciting new chapter.”

Teen Mom 2 should be another episode filled with crazy drama. So make sure to bookmark this spot and come back for our Teen Mom OG recap tonight from 9PM – 10PM ET! While you wait, don’t forget to check out all our Teen Mom 2 recaps, spoilers, news & More, right here.

Kailyn and Javi have been co-parenting their son Lincoln and so far, it seems to be working out. They have a fifty-fifty agreement which translated into one week on and one week off, but when the two do meet, they are civil to each other. So they had no problem with discussing their divorce and both had been pretty cheerful when it finally went through. And so the former couple were in a good place. Kailyn was focused on her kids as well as the baby she was going to have and Javi had sort of gotten flirty with another teen mom that he had met through the show.

Javi had apparently met Briana and her family thanks to MTV and he was on good terms with all of them. However, his friendship with the group of mostly women tended to be flirtatious. So the ladies had all thought it was funny when did that and he was more or less treated as a great friend and confidant. Briana for example had talked to Javi about her latest pregnancy and how she was already worried about juggling motherhood with everything else, but this time around Briana wasn’t doing everything by herself.

Briana was first introduced to the world when she was first pregnant with her daughter Nova and she had been forced to rely heavily on her mother and sister because Nova’s father was barely in their lives. However, a lot has changed since we last saw her. She was older and she was with someone that had actually wanted to stick around for his child. So, while they had gotten pregnant fairly fast, she and Louis seem to be moving forward with their relationship and he’s already told Briana that he was going to be there for Nova as well.

Yet, not everyone’s home life had settle down. Leah for one was being run ragged as she tries to raise three girls and go to school on top of that. So the only help she received was from the twins’ father because Corey was a great help and she had wished that her ex-husband Jeremy didn’t travel so much for work just so he could be there more for their daughter Addie. Addie as it turns out was the hardest to wake and she tended to lose things. Like her toothbrush one morning and so Leah had had to improvise by giving the little girl mouth wash just to get her child through the school day.

So going back to school wasn’t easy for Leah, but she was desperately trying to finish her education and Kailyn was doing the same. Kailyn was still going through school and she simply didn’t have time for relationships so she told the producers not to talk about that because she was a little bit sensitive about her situation. She was pregnant and the father of her baby didn’t want to be identified on tv or on her blog seeing as he wanted to distance himself from what was happening with the tv cameras. Though it didn’t really matter what he wanted. The baby was coming and so he would have to be identified eventually if he wanted a relationship with his child.

Also, lest not forget Jenelle! Jenelle was also pregnant and she found herself arguing with her fiancée David recently because they were moving and he had wanted to help more by watching Kaiser. But Kaiser was a lot for a pregnant woman to handle and she couldn’t necessarily run after him or even keep up with his amount of energy. So Jenelle didn’t understand why David was accusing her and Kaiser of being in the way and David kept on telling Jenelle that he couldn’t move a thing with a toddler constantly running around, but it got ugly between them quite fast.

They were shouting at each other in front of the older kids and Kaiser was also beginning to question what was going on when his mother locked herself in the bathroom to cry. However, Jenelle feels the problem was that they didn’t have help. She couldn’t run after Kaiser and David was busy, but it would be easier on them if they had someone they could turn to whenever they needed help with Kaiser. So it was unfortunate that Jenelle wasn’t talking to her mother because they were struggling over custody of her older son Jace.

Jace though seemed fine and this thing between his mother and almost stepfather doesn’t appear to be bothering him. Yet, Leah’s daughter Addie was struggling with not seeing her father as much as her sister got to see theirs and she didn’t understand why he was away so much. So she had cried the last her sisters got picked up by their dad and she had asked Leah where her daddy was. Except there was nothing that Leah could do about what was happening and Addie sadly wasn’t the only going through separation anxiety.

Javi had learned that he could be shipped out soon and both Lincoln and Isaac had done their best to cheer him up when they saw their dad start to cry. But Javi knows that he has to go back because it was between him and another guy and the other guy was going through family issues at the time. So Javi had accepted his fate and he had done his best to move on only he knew that it was going to be separated from the boys again. And speaking of separation, Jenelle had finally gone to that hotel with Kaiser because she needed to get away from David who she felt was acting like her ex.

So Jenelle had accused David of not caring and he had called her bluff. He had told her that she could go back to her ex whenever she wants. Though that wasn’t the reaction that Jenelle was expecting and so it had only made her even more upset. She thought David didn’t care about her feelings and she wondered why he had suddenly changed on her. And so Jenelle had wanted answers from her baby’s father and Briana had wanted the same. Briana had found out that her boyfriend was talking to someone on Instagram and that had made her feel like she was dealing with her ex as well.

However, the one mom that seemed to be in a good place and had someone by her side was Chelsea. Chelsea had recently gotten married and she welcomed a little boy on tonight’s episode with her husband.