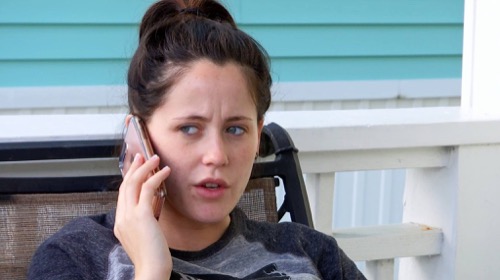 Tonight on MTV Teen Mom 2 returns with an all-new Monday, August 7, 2017, episode and we have your Teen Mom 2 recap below. On tonight’s Teen Mom 2 Season 8 episode 4 as per the MTV synopsis, “Leah investigates a business opportunity; Ali struggles with her illness; Kailyn faces Javi in court over the PFA; Chelsea hears disturbing news about Adam; Jace meets his baby sister, Ensley; and Jenelle announces her engagement.”

Teen Mom 2 should be another episode filled with crazy drama. So make sure to bookmark this spot and come back for our Teen Mom 2 recap tonight from 9 PM – 10 PM ET! While you wait, don’t forget to check out all our Teen Mom 2 recaps, spoilers, news & More, right here.

Jenelle was in a good place. She recently gave birth to her daughter and has been surprised when David proposed to her however it was long after Jenelle said “yes” that she started to think about her relationship with her mother. The two women have been in a love/hate relationship for years and that doesn’t seem like it’s going to change anytime soon. But now was the time to able to call your mom and ask for advice about weddings dresses. So Jenelle had gotten upset because she knew that it wasn’t going to happen with her mother.

But Briana for one was glad that she had her mother in her life. Roxanne had stepped up to help raise Briana’s daughter Nova when she realized that she couldn’t rely on her ex. So Roxanne has been someone that Briana couldn’t always rely on and she had needed her mother’s help once Nova began hating her hair. The little girl had wanted long and straight her like her doll’s though everyone from Briana to Roxanne and even Brittany had tried to tell Nova that she was beautiful just the way she was.

Nova was after all trying to compare herself to her blonde blue-eyed doll and she wasn’t Caucasian. She was mixed because her mother was Spanish and her father was Black. But Nova was beginning to notice that she wasn’t like her mother and so Roxanne had pointed out that Devoin should really start playing a large role in Nova’s life. She believed that if Devoin was around more often that Nova would feel less different because she would then have someone that’s looks like her and who could talk to her about why she’s darker then her mommy. So Briana had said she would talk to her ex.

Devoin apparently makes plans and then cancels at the last minute because Brianna now knows there was something neither she nor her mother could do for Nova. Nova needed her father and nothing else would do in her situation. But Aubree did get off a lot easier than some of the other kids that didn’t have a reliable father in their lives. She had her stepfather and he’s loves her as if she were his. So Aubree didn’t have a problem with her other dad not in the picture and she had actually told her mom she was ok.

Chelsea had asked Aubree if she missed her dad and Aubree had said “no”. She explained that she doesn’t even think about her father unless she’s around her grandmother and that otherwise it doesn’t bother her. But Aubree’s father Adam did want to change the terms of child support and it was only if he failed a drug test would he lose privileges with Aubree. So Chelsea had talked about that with her dad and her dad brought up a great point.

He asked what kind of drug tests are they going to run because Adam could always take something like steroids and not have it show up in a test for something like heroin or weed. So Chelsea still has to find out a few things before she can agree to anything Adam offers. But fellow teen mom Kailyn had felt like her relationship with her ex Javi had gotten so bad that she filed for a restraining order and got Javi to agree to it. He agreed that he wouldn’t come within feet of Kailyn unless it was for drop-offs and that he couldn’t contact her at all unless it was regarding their son Lincoln.

So Kailyn was relieved to finally have that settled, but Javi was angry with her and he accused her of being manipulative. He said that Kailyn could have cost him his job by filing for an order against him and that she knew what she was doing by going ahead with that so Javi had protected himself by agreeing to keep his distance. That way he wouldn’t be dishonorably discharged and got to keep his job. But Kailyn had said that she needed boundaries because Javi couldn’t always control his temper and would confront her about rumors he might have heard. And so the “agreement” allowed her to feel safe.

Otherwise without it she would have been worried about his next outburst. But speaking of tempers, Jenelle and her mother were both concerned about Jace’s recent behavior. The little boy had started hitting people and acting out however nothing they said would get Jace to stop and he couldn’t always explain why he did it. He would tell his mother one story and then say something different to his grandmother. So Barbara suggested taking Jace to therapy in order to find out what was going on and surprisingly Jenelle agreed with her.

Jenelle thought that Jace needed a third party to go to and that talking to a therapist could allow him to say whatever it that he’s struggling with. But in the meantime, both women have kept an eye out on him because he continues to hit people. He hits his brother, his cousin, and isn’t afraid to hit Barbara. So if nothing else that has at least brought them together and Jenelle’s relationship with her mother looks like its finally getting better. And just as Chelsea thought things were going to change, she finds out that Adam failed his drug test because he had meth in his system.

But that got Chelsea thinking. She wondered now if everytime Aubree saw her dad and thought he was sick or sleeping – was he really sick or was he high? So Chelsea doesn’t know what the next part will be though she’s thinking about what’s best for her daughter. And elsewhere Leah is thinking going into a business venture that she hopes will grant her some independence going forward.