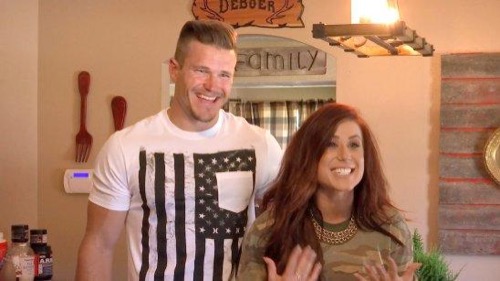 Tonight on MTV their series Teen Mom 2 continues with an all new Monday, January 2, 2017, season 8 premiere called “Breaking The Wall” and we have your Teen Mom 2 recap below. On tonight’s Teen Mom season 8 episode 1 as per the MTV synopsis, “Jenelle faces Nathan and his girlfriend in court for her assault trial; Leah struggles with Addie missing her father; and Chelsea meets with Adam’s ex.”

It sounds like Teen Mom 2 is going to have another amazing season and will be an awesome show.  So make sure to come back between 9PM – 10PM ET for our Teen Mom 2 recap.  While you wait for our recap make sure to check out all our Teen Mom recaps, spoilers, news, photos and more, right here!

Kailyn is staying busy now that she and her boyfriend Javi are still apart. He is still on deployment. She has decided she needs a change so she is taking chances and has decided to sky dive. Paired up with a jumper, she parachutes from a plane.

Meanwhile, Adam tells one of the producers that he isn’t ready to be filmed. He doesn’t want to do the show. After 45 minutes he finally lets the producers and cameras in. The producers want to know what he wants and how he will be on the show. He isn’t happy that they only film the bad stuff.

Janelle and her new boyfriend David are doing great. She is even getting along with her mom. Jenelle isn’t getting along with Nathan though. She has court tomorrow for an assault charge. She could possibly be going to jail for 30 days. On the way to court Jenelle breaks down to David. She has been having nightmares.

Leah is getting along with Corey and Amanda, finally. She’s trying to raise the girls better but when she can’t find the keys to the van she starts crying and feels like she needs a minute to breathe, alone in the cellar. Every time the cameras are around she has a hard time. She can’t be late for the girls’ softball game. It’s important and she is going to be late.

Chelsea has picked out a special dress for her daughter for her upcoming wedding.

Chelsea and her girlfriends are out on the front porch hanging out. She tells them that Adam is thinking of quitting the show.

Leah is upset because the show is affecting her. She is trying to change but it’s hard when she has a camera on her.

Javi calls a friend by Facetime. The two talk about Kailyn and the kids. He explains that he and Kailyn have hit rock bottom. Their marriage is in trouble but he is willing to fight.

Chelsea takes her daughter to try on her dress. Aubrey models it for everyone. She is excited. She wants heels for her dress.

Leah picks up the girls from school. She meets up with Jeremy, her ex. He is leaving on business. He is going to gone for 3 months. Leah wants him to Facetime or Skype Addie.

Chelsea is out to lunch with all the girls. They thanks them all for coming.

Kailyn is taking Isaac out to celebrate his kindergarten graduation. His biological dad and his family come but Isaac wants Javi not him. Javi calls and Isaac is instantly happy, making his dad upset.

Outside of the courtroom, Jenelle is waiting to find out what is going on. She can’t stop crying while her boyfriend consoles her.  Jenelle returns to the court and receives a not guilty verdict.