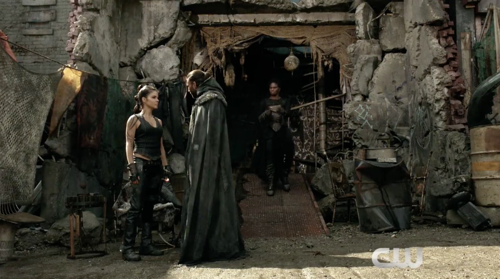 Tonight the CW series The 100 airs with a Wednesday, February 15, 2017, season 4 episode 3 and we have your The 100 recap below. On tonight’s episode called, “The Four Horsemen” as per the CW synopsis, “aha leads Clarke [Eliza Taylor] and Bellamy to possible salvation. Meanwhile, tensions escalate in Arkadia and Polis.”

So make sure to bookmark this spot and come back between 9PM – 10PM ET for our The 100 recap. While you wait for the recap make sure to check out all our The 100 news, spoilers, recaps & more, right here!

Raven, Clarke and Bellamy talk about how dire the situation will be once they are locked in the ark. As they speak sick grounders approach Arkadia. Abby examines them and determines they all have acute radiation sickness. While they thought they had 6 months they were wrong. Radiations levels are rising quickly. King Roan sneaks in to downtown Polis to speak to Octavia, He tells her that the key has been taken from his quarters. Octavia says she will find it and leaves to begin the search of the village. John and Emori fight about him having sex with Echo but he tells her he had no choice. He leaves to return to Arkadia for food and tells her he will return.

Abby realizes that all of the sick people will probably die. Raven analyses the data and says they only have 2 months until they will all die. Phelonious tells Clarke and Bellamy that he thinks there is a fallout shelter less than a day away that will hold thousands of people. The 3 of them set out to find the bunker. The bunker was built by a doomsday cult that believed the government was going to attack them and built the bunker as their refuge.

John returns to Arkadia as Raven is busy trying to seal the ark. John steals food to take back to Emori and hides as Abby and Raven talk about the radiation levels on the planet. Raven refuses to give Abby the medicine needed to save the sick grounders. John can’t believe what he is hearing. John steals the needed medication and gives it to Abby. They start by giving the pills to the young grounder girl and wait to see if she improves.

Octavia finds Gaia and they fight over the flame. Octavia is about to kill Gaia when Indra appears and stops Octavia from killing her daughter. Looters break in, take the flame from Gaia and destroy it.

After they leave Gaia reveals that she had the real flame hidden and she leaves with it. Raven sees that the medication has been taken and confronts Abby. Abby tells Raven the medication did not save the girl. The search team arrives at the bunker and uses the rover to break open the door. As they enter they see that everyone is dead. The bunker was not properly sealed to keep the radiation out. It will not help them survive.

Octavia returns to King Roan to report that the flame has been destroyed. John and Emori reunited and decide to return to Arkadia. Clarke begins to make the list of 100 who will be allowed inside the ark to survive. She cries and says she cannot put herself on the list. Bellamy does it for her. Abby and Clarke meet in the infirmary and see that all of the grounders have died except Luna. Her night blood has made her immune to the radiation. They realize this may help them all survive.