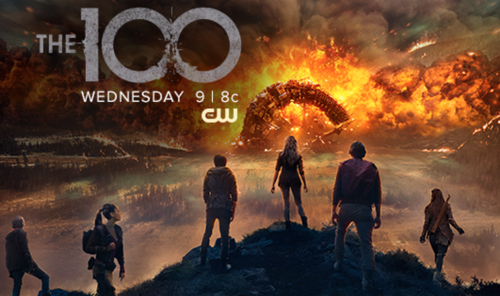 Tonight the CW series The 100 airs with a Wednesday, February 8, 2017, season 4 episode 2 and we have your The 100 recap below. On tonight’s episode called, “Heavy Lies the Crown” as per the CW synopsis, “The burden of leadership weighs on Clarke [Eliza Taylor] and Bellamy when different challenges force them to determine who will live and die.”

So make sure to bookmark this spot and come back between 8PM – 10PM ET for our The 100 recap. While you wait for the recap make sure to check out all our The 100 news, spoilers, recaps & more, right here!

The show begins with a mother tied to a post crying. Her son approaches and tells her to take the key. She refuses and he kills his brother. A.L.I.E. appears and tells the son to put the knife to his own throat. Just then A.L.I.E. says,” Clarke no” and disappears. The boy realizes what he is doing and rushes to help his mother. She tells him he must avenge her and then dies.

Kane and Abby are in bed together but she must leave because the king needs her. She leaves as Kane warns her to be careful. The boy from the first scene is in a bar talking with Ral about wanting revenge against Sky crew, blaming them for all of A.L.I.E.’s destruction. Ral talks of killing King Roan as Octavia listens to the conversation.

Echo tells King Roan that they have doubled the amount of guards on the palace and asks him why he insists on following in Lexa’s footsteps. Kane and Octavia arrive and tell Roan that Ral is going to challenge him for control. They both worry that Roan is still not strong enough to will a physical fight. It is decided that Kane will go and try to talk Ral out of making the challenge.

Clarke, Bellamy, Monty and Raven try to figure out a way to save the planet. They think if they can patch up the Ark they will be safe. Monty tries to convince Jasper to go with them to farm station to get supplies. He refuses to go but asks Monty to get his pot while he is there. Bryan, Miller, Monty, Harper and Bellamy leave to get a hydro-generator.

As soon as they arrive at the farm station they are captured but soon released once it is realized they are part of the alliance with King Roan. Raven gets a team working on repairing the ark so that it can be sealed up to protect them all from the radiation. As the group gets the generator from the farm station they realize a group is being held as slaves being forced to work on the farm.

Roan works out but is still weak from his injuries. Echo offers to take his place in the fight but he says no. Echo begs Roan to turn on Sky crew. The only reason the other nations are challenging him is because of his loyalty to them. Roan tells her the end of the world in near due to the radiation and Sky crew is their only hope. Echo thinks they are lying.

Kane and Octavia meet with Ral but he refuses to call off the fight with the King. Clarke tries to figure out a way to save all of the people on Earth not just Sky crew. She gets frustrated and goes to Jasper but he offers no help. The team at farm station decides to take the generator back to the Ark and then plan to return to free the slaves. However, one of the slaves tells them that they will be moved the next day. The group decided to use the generator as a bomb to free the slaves.

Phelonious and Clarke talk about how hard it is to be a leader. Phelonious says “heavy weights the crown.” He tells Clarke you make the best decision you can and then hope that there is a forgiving God. Abby tells Kane she has to go back to Arkadia and Clarke. Octavia approaches Ral and says fight her instead of Roan. He refuses so she kills him.

King Roan calls the counsel together but Ral’ seat is empty. Echo tells the King he was found dead that morning. The team returns to Arkadia without the generator but with the rescued slaves. Clarke calls the people of Arkadia together and shares the information about the radiation with everyone. She tells them if they work together they will all survive and thrive. The truth is only 100 of them will actually be able to take shelter in the Ark.