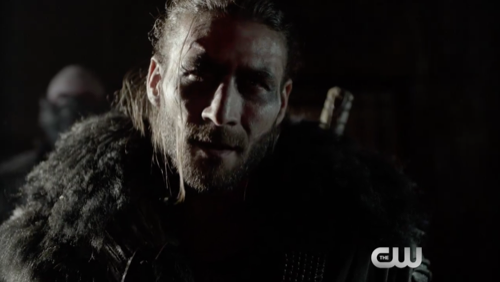 Tonight the CW series The 100 airs with a Wednesday, March 1, 2017, season 4 episode 5 and we have your The 100 recap below. On tonight’s episode called, “The Tinder Box” as per the CW synopsis, “Clarke makes a desperate plea to a former ally in an attempt to avoid war and to ensure the survival of her.”

So make sure to bookmark this spot and come back between 8 PM – 10 PM ET for our The 100 recap. While you wait for the recap make sure to check out all our The 100 news, spoilers, recaps & more, right here!

Raven and Abby work in the newly found lab trying to figure out how to save the planet from the radiation. Raven has a seizure and Abby has to medicate her to bring her back. Octavia rides her horse back to Arkadia but is in very bad shape when she arrives. Clarke works feverously to revive her and is successful. She tells Clarke that war is here, Azgada is coming. Clarke calls all the guards together to make a plan to protect Arkadia. Clarke decides to ride out to meet king Roan to try to convince

Clarke calls all the guards together to make a plan to protect Arkadia. Clarke decides to ride out to meet king Roan to try to convince him war is not necessary. She meets them at the impasse but Roan says the time to talk has passed. He orders his men to kill Clarke but then realizes her team has their sights set on him. He brings forward his prisoners Bellamy and Kane and then agrees to speak to Clarke.

Octavia regains consciousness. Iliaian walks around the Ark studying every piece of the structure. Raven realizes that they can create Nightblood in a zero gravity environment and discovers a pod they can use to launch into space.

Riley goes rogue and Monty is afraid he is going to kill Roan and start the war. Clarke and Roan talk and she tries to convince him that the Nightblood can save everyone. He says war is the only answer. Clarke offers to share the Ark with Roan. Monty tells Echo about his fears regarding Riley and she and Bellamy go to the cave where Clarke and Roan are meeting to stop Riley.

Abby puts Raven through a brain scan and realizes she had a stroke. She also sees that Raven is using a huge percentage of her brain. Raven has retained many of the things ALIE knew. Bellamy and Echo move to the cave. Roan and Clarke agree on the 50/50 split and to work together. They shake with blood. Bellamy finds Riley and is able to talk him out of killing Roan.

Octavia realizes that Iliaian is trying to sabotage the Ark and she and Harper search for him. He sets the entire room on fire before they can stop him and there is an explosion. Clarke and Roan see it from miles away. Arkadia is in flames and Sky crew flees. Clarke, Roan and the team arrive back to Arkadia to see the entire Ark collapse in flames. There only sure hope is gone. Abby hallucinates that Clarke is dying of radiation poisoning and tells her we are running out of time.