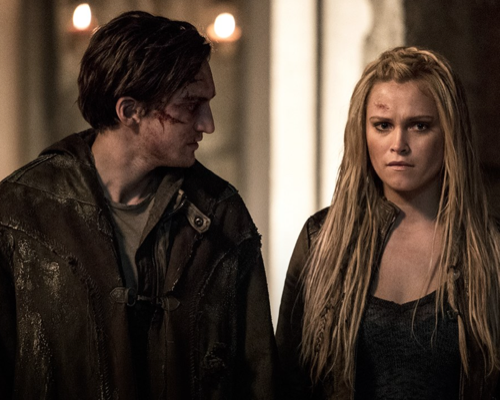 Tonight the CW series The 100 airs with a Wednesday, March 22, 2017, season 4 episode 7 and we have your The 100 recap below. On tonight’s episode called, “Gimme Shelter” as per the CW synopsis, “Clarke’s arrival on the island takes a turn for the worse. Elsewhere, Bellamy attempts to prevent further tragedy in Arkadia .”

Octavia hunts down Ilead but instead of killing him offers to help him when the black rain comes. The rain hits Arkadia and everyone runs into what is left of the Ark. Octavia and Ilead make it to a cave and rinse off with the fresh water. Clarke gets a tour of the lab and is thrilled to be reunited with her mother. Raven has had a stroke and can only heal if she takes it easy but Abby doesn’t think she will follow directions.

Abby says now that they can’t make it into space their only hope is to inject someone with Luna’s bone marrow to see if can counteract the radiation. It means they first have to expose someone to dangerous levels of radiation and it could be a death sentence. Emori overhears them talking.

Bellamy decides to take the tank to try to rescue one of their men who is lost in the rain. He also hopes he can find Octavia. Kaine doesn’t want him to go but he won’t listen. Clarke and Emori go to gather supplies and find John rocking out at ALIE’s old house. Emori waits for Clarke to go shower and then tells John they have to leave right away. She is convinced she will be used by Abby and Clarke to test the radiation and night blood. She doesn’t want to die. John tries to calm her down.

An old enemy of Emori’s breaks into the house and tries to kill Emori but John saves her. Bellamy gets stuck in the mud and can hear his men dying due to the rain. He is heartbroken but tells them he can’t get to them.

Clarke tends to Emori’s wounds and she is insistent that she be allowed to kill the man who broke in but Clarke has a different idea. His death could save them all. They can expose him to the radiation and see if Luna’s bone marrow can offer immunity. Ilead tells Octavia that she does have feelings. He tells her his sad story and says the person she was before she lost Lincoln is still inside. She tries to run into the black rain and kill herself but he stops her. She cries and then kisses him. She begs him to make her feel something else and they begin to have sex.

Abby is torn because she is struggling to justify taking the life of one person to save the rest. She doesn’t know if she can live with herself for what she is about to do. Bellamy also struggles with his failure. He didn’t protect his sister and he didn’t save his men. Kaine tells Bellamy he is proud of him but Bellamy reminds Kaine he floated his mother.

The storm ends and Ilead says he is returning to his sheep. Octavia offers to give him a ride home. Bellamy returns to Arkadia. Abby and Clarke begin the treatment of the man. Emori admits to John that she had never seen him before and made up the story so he would be used for the experiment instead of her.