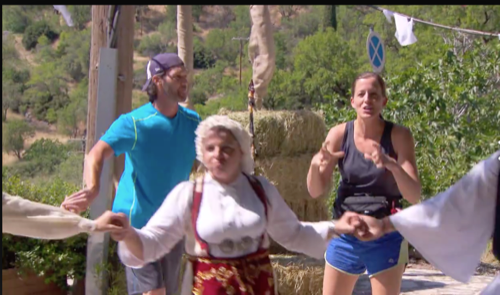 Tonight the CBS series The Amazing Race airs with an all-new Thursday, May 11, 2017, season 29 episode 8 and we have 1your The Amazing Race recap below. On tonight’s season 29  episode 8 called,“Good Job, Donkey” as per the CBS synopsis, “While driving to the Detour, one team ends up going the wrong way, and a surprising U-turn causes friction between racers.”

Matt and Redmond start the race and head to Greece. Becca and Floyd, Joey and Tara, Brooke and Scott, London and Logan then Liz and Michael leave in that order. Once they arrive in Greece teams will have their last chance to U-turn the other teams. Liz and Michael miss the turn and argue once again. Liz tries to get him to turn around but her refuses. All the other teams reach the U-turn. Brooke and Scott U-turn Michael and Liz. Joey and Tara decide to U-turn Becca and Floyd to give Michael and Liz a chance to stay in the game.

Teams must face the detour by choosing between For the Bride: they must deliver two cans of milk to a cheese maker and then take the cheese to the Bride or For the Groom: they must race up over 200 steps to a shepherd who will give them a lamb that they must then deliver othe groom. Brooke and Scott are in first place and will complete For the Bride. Joey and Tara and Matt and Redmond also decide to complete for the Bride.

Becca and Floyd are lost and Michael continues to refuse to turn around even though Liz is sure they are going the wrong way. Logan and London arrive at the U-turn and are relieved to see they get to move on. They pick For the Bride. Joey and Tara complete the detour and drive on to their next clue. Matt and Redmond finish next and are in second followed by Brooke and Tara in third. Logan and London finish the detour in fourth. Neither Becca and Floyd or Michael and Liz have even arrived at the detour as the other four teams move on to the next clue.

The clue requires that each team run a victory lap around the stadium. Michael and Liz arrive at the U-turn and can’t believe that Scott and Brooke used it on them after they helped Brooke complete two different tasks when she was struggling. Becca and Floyd are also shocked they have been U-turned but they aren’t angry and bitter like Michael and Liz. They keep their sense of humor. Joey and Tara come to the roadblock. One of the team members must master the march used by the guards. Tara takes it on.

Matt and Brooke also decide to complete the road block for their teams. Michael and Liz complete the For the Bride and move on to For the Groom. They only get one goat instead of two and have to climb the steps again. Becca and Floyd complete For the Bride and then For the Groom. They are in last place but right behind Michael and Liz. Tara completes the roadblock on her third try and she and Joey head to the pit stop. Brooke finishes on her second try and she and Scott run for the pit stop. Matt is successful on his first try and they take off in third place.

Becca and Floyd drive to the road block and Becca decides she will complete the march. Logan and London check in as team number four. Becca fails at her first attempt and tries again. She is successful and she and Floyd run to the pit stop. Liz finishes on her first try. Becca and Floyd arrive in fifth place and are still in the race. Michael and Liz check in last and are eliminated.