BY Amanda Austin on May 30, 2017 | Comments: one comment
Related : Recap, Television, The Americans, TV 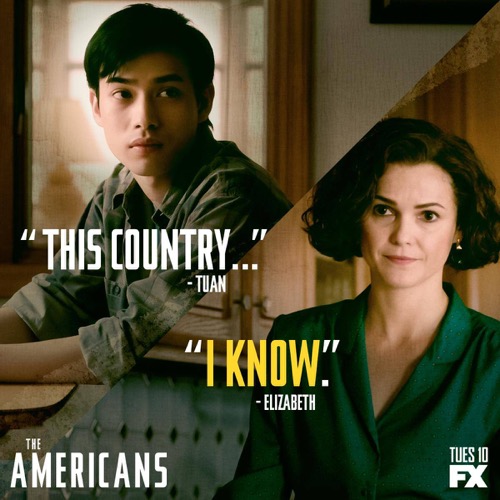 Tonight on FX The Americans airs with an all new Tuesday, May 30, 2017, episode and we have your The Americans recap below.  On tonight’s The Americans season 5 episode 13 Finale called, “The Soviet Division” as per the FX synopsis, “In the season finale, Philip (Matthew Rhys) and Elizabeth (Keri Russell) race against the clock as a life hangs in the balance, while Stan faces an uncertain future.”

Tonight’s episode of The Americans kicks off where we left off last week, Philip, Elizabeth, and Tuan are banging on Pasha’s door but there’s no answer. Tuan just revealed to them that he convinced Pasha to fake a suicide attempt to get his parents to move back to Moscow. Philip is freaking out, he’s furious that Tuan would do something so crazy, and scared that they are too late and Pasha may die.

Alexei and his wife pull up and invite Philip, Elizabeth, and Tuan in for beers – they’re totally oblivious to what is going on with their son. Tuan heads upstairs and finds Pasha in his room, he’s unconscious and bleeding from his wrists. He screams for help and Elizabeth calls 911. Alexei and his wife run upstairs and keep pressure on his wounds.

Elizabeth is shocked when Alexei runs outside and grabs the FBI agent out of the car for help. After the ambulance leaves with Pasha, Alexei explains to Philip that the FBI agent is their protection. The Americans assigned him to watch over them since they defected from Russia.

The next day Philip returns home from the store and sees Stan and Renee in the driveway packing up boxes. Stan says that a pip burst in Renee’s building so she has to stay with Stan for a month.  He heads in the house and updates Elizabeth on Pasha, he stopped at the hospital.  Pasha is getting better, and his parents have decided that his mother will return home to Moscow with him.  It looks like Tuan’s crazy plan may have worked after all.  Alexei is refusing to go back to Moscow though – he’s too scared of the repercussions he will have to face for defecting.

Elizabeth and Philip are planning on quitting the Centre and moving back to Moscow too.  Elizabeth confesses that she wants to take Tuan with her before the Centre ruins him, he has his whole life ahead of him.

Meanwhile, Stan and his partner meet up with Sofia’s boyfriend.  Last week he tried to pressure Stan in to hiring him for intel too.  Stan is certain that they are being stood up, but surprisingly, Sofia’s boyfriend passed the test with flying colors.

Philip and Elizabeth head to the safe house to meet with Claudia.  She’s thrilled that Pasha and his mom are heading back to Moscow.  Philip has reservations, he doesn’t want Alexei’s family broken up.  One the ride home, Elizabeth and Philip discuss how they will tell Paige and Henry that they are uprooting the family and moving back to Moscow.  Henry has no idea who his parents really are, or that they aren’t from America.  He’s going to be totally blindsighted and shocked, but Elizabeth thinks that Paige can help them get through to him.

Meanwhile in Moscow, Philip’s former flame Martha heads to the park with a man from the Centre. Her Russian is still very rusty, it’s pretty clear that she hasn’t been adapting to life in the Soviet Union super well since they moved her there. The man shows her small children in the park, playing ball, he explains that they are all orphans and the Centre wants her to be happy. It looks like they are trying to arrange an adoption for her.

Elizabeth and Philip sit Tuan down now that their work together is over. They’re worried about him and want to try to help get him out of the Centre. Pasha shocks them – he reveals that he already submitted his report, and he reported them for nearly blowing their job and not making all of their meetings. Elizabeth sits Tuan down and lectures him, she tells him that he’s not going to make it, their work is too hard and he won’t be able to do it all on his own. She warns him that one day he will get caught or killed and its only a matter of time before it comes crashing down – he needs to find himself a partner.

Philip returns home and Henry greets him at the door. Henry is ecstatic, he got in to the elite boarding school that he applied to. He reminds Henry that his parents promised him he could go if he got accepted. Philip shouts that he’s not going, and their family is staying together, and then he storms off leaving Henry bewildered.

At the food bank, everyone is chatting about Pastor Tim leaving for his mission and who will be replacing him. Paige jokes with Pastor Tim about him leaving, and they enjoy their last food bank together.

Phillip puts on his old disguise as Jim and heads to a little party at the teen girl Kimmy’s house that he has been working on for months. He tells her that he is probably moving to Japan for work. She breaks down in tears, he gives her a pep talk and tells her that she’ll be fine – she’s going to have a great life with or without him there. They share an emotional goodbye.

Philip heads home and he and Elizabeth listen in on some phone calls in the basement. Elizabeth wants to know what is going on with Henry. Philip admits that he yelled at him, Elizabeth reassure him that everything will work out, and Henry will have bigger problems soon enough. Elizabeth heads to the garage for a self-defense lesson with Paige.
Philip gets a shock while he’s listening in on Stan’s phone calls. He learns that Stan was offered a huge job at the CIA, they want him to run their Soviet decision. Philip takes the tape and goes for a walk, when he returns him, he’s shocked to see Paige sitting at the kitchen table with a fat lip. She explains that she caught a punch while she was training in the garage with her mom. Philip sits down and apologizes to Paige, he feels guilty that she was robbed of some of her childhood because of who her parents are.

Philip takes Elizabeth out for a late night walk, he confesses to her that he took a drive earlier and considered throwing away the recording of Stan and his new job offer. Philip explains that Stan has been offered a job at the CIA as head of the Soviet Division. Philip and Elizabeth both know what this means – there’s no way that the Center is going to want them to leave. Especially now that Stan has landed such a crucial job and they are already close with him.

Elizabeth tells Philip she doesn’t want to leave now. She can’t back out now. She wants Philip to take some time off though, Elizabeth thinks he should drop his responsibilities and just work on their travel agency cover. She’s worried about Philip, the spy life is taking a toll on him, and it’s only a matter of time before he cracks.