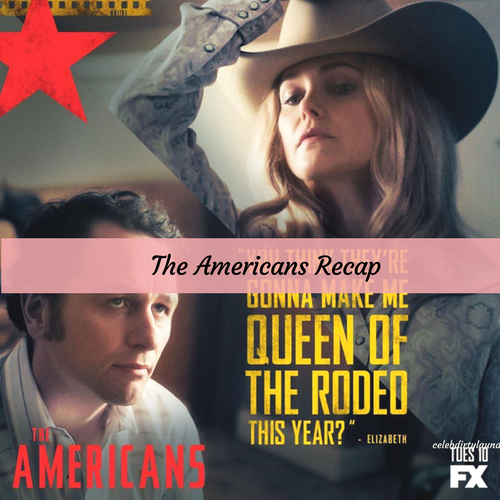 Tonight on FX The Americans airs with an all new Tuesday, March 28, 2017, episode and we have your The Americans recap below.  On tonight’s The American’s season 5 episode 4 called, “What’s the Matter with Kansas?,” as per the FX synopsis, “Philip (Matthew Rhys) and Elizabeth (Keri Russell) have qualms about a new assignment while a specter from Philip’s past creates unforeseen dangers.”

Tonight’s episode of The Americans kicks off with Elizabeth and Philip meeting with their handler – he has found them a few potential marks to infiltrate in Topeka to get to the bottom of the Agrycor business and America infecting the Soviet Union’s grain supply.

Elizabeth and Philip try to get out of it, they explain that driving to Topeka every week is taking up too much of their time, they have work they are trying to do here, plus things are complicated with their daughter Paige right now. The handler won’t take “no” for an answer, it looks like they are going back to Topeka…again.

It looks like Paige isn’t Elizabeth and Philip’s only problem –the next morning they have to deal with her little brother Henry. Apparently, Elizabeth got a phone call from his math teacher and there was a problem at school.

Meanwhile in Russia, Oleg is caving under the pressure that the FBI is putting on him. He confesses to his mom that he’s in trouble. Oleg explains that when he was in America, he told Stan some things that he shouldn’t have, and now he’s being blackmailed. Naturally, his mom doesn’t take the news well.

Philip heads to Topeka in his disguise, he tracks down an accountant from Agrycor at the gym and tries to strike up a conversation with her, Deidre Kemp isn’t interested. So, Elizabeth gives it a go and heads to Topeka and tries working another employee from Agrycor, she turns on the charm when she bumps in to Ben Storbert at the health food store.

Back home, Philip heads out for drinks with Marazov. He tells Philip all about the beer in the Soviet Union, as if he doesn’t know about it. Marazov rants about how broken the Russian system is, and how the food is rotten.

Elizabeth returns home from Topeka and Philip is waiting up for her. She fills him in on her meeting with Ben Storbert, and she brought him back a gift – a tiny bottle of alcohol that a guy bought for her on the plane.

In the Soviet Union, Oleg is reporting to work every day as if nothing is wrong. He and his partner are investigating a local grocery store, they seem to have cut an illegal deal with a food supplier to box out the competition.

The next day at work, Stan and his partner are working on a surveillance detail. He tries to talk to Stan about Oleg, Stan is not happy that the FBI is blackmailing him and has made it very clear. Stan’s partner seems to think that the situation could turn out good for everybody, Oleg could get a boatload of cash out of it and no one will get hurt.

Paige heads to Pastor Dave and his wife Alice’s house to babysit their newborn. Paige chats with the Pastor about her strained relationship with her mother, and gives her a book to read by Marx. After they leave, Paige snoops around their house. She finds a journal in the Pastor’s dresser and sits down to read it.

Elizabeth heads back to Topeka to go on a hiking date with Ben. Meanwhile, Philip continues to try to work Deidre and convince her to go out to dinner with him. Elizabeth heads back to Ben’s house with him, and after a heavy makeout session, she puts the breaks on and says that she has to go work, but she wants to see him next week when she returns to Topeka.

Stan heads back to the office and meets with his boss. He gives him a taste of his own medicine and Stan decides to blackmail his boss. Stan explains that he killed a spy named Vladimir in cold blood 3 years ago and the FBI covered it up. If the FBI doesn’t leave Oleg alone, then he is going to go public about Vladimir’s murder and destroy the agency, even if it means going to prison himself.

The next day Paige corners Elizabeth in the kitchen – she noticed that her parents have been travelling out of town a lot. Elizabeth says that they are working new sources in Topeka, she’s been getting to know a scientist that knows a lot about the grain that is being contaminated. Paige is curious about her mom’s alter ego, her fake name, and her fake job.

Paige confesses to her mom that she read the Pastor’s diary, she was trying to make sure that he’s not suspicious of their family. Paige obviously thought her mom would be impressed by her stellar spy moves, but Elizabeth scolds her and warns her that if she got caught, she could expose their entire family.

In the Soviet Union, Oleg gets a pep talk from his mother. She confesses that before she was born, she was taken away and put in a camp for five years. And, she did whatever she had to do to survive. Oleg needs to do what he needs to do to survive and get through this.

When Philip gets home, Elizabeth fills him in on Paige’s latest drama at the Pastor’s house. Philip quizzes Elizabeth about her latest trip to Topeka, and how things are going with Ben, he thinks that she likes Ben. Elizabeth scoffs, “I have to sit there and laugh at his jokes while he is trying to starve an entire country.”