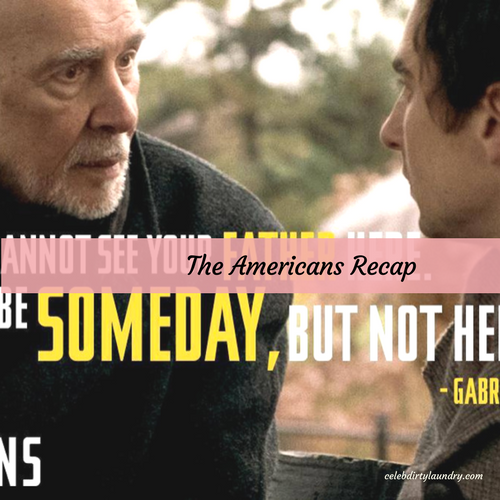 Tonight on FX The Americans airs with an all new Tuesday, April 11, 2017, episode and we have your The Americans recap below.  On tonight’s The Americans season 5 episode 6 called, “Crossbreed” as per the FX synopsis, “Gabriel stuns Philip (Matthew Rhys) and Elizabeth (Keri Russell) with a sudden announcement and a crushing revelation about Philip’s past.”

Tonight’s episode of The Americans kicks off with Elizabeth filling her and Philip’s handler in on Stobert – it turns out that he’s not trying to starve Russia, he’s trying to create a super grain to stop world hunger. The handler doesn’t want them to pull out, instead he wants them to stay on Stobert and Kemp and get photos of the green house so that Russia can get their hands on the super grain.

Elizabeth is wearing thin, she and Philip have been working double time and it doesn’t seem like they will be getting a break any time soon. Plus, Philip is not handling the fact that they killed an innocent man at the green house very well.

Elizabeth heads home and fills Philip in on her meeting with their handler Gabriel. Elizabeth confesses to Philip that she feels guilty about killing the guy in the lab too, but hints that he needs to stay on his A-Game.

Philip’s son Mischa returns to the Soviet Union on the plane that Gabriel put him on. Philip has no idea that his long lost son showed up in the states looking for him.

Stan and his partner are still tracking down possible Russian defectors. The corner a woman named Mrs. Kovalenko at a park, she’s scared to speak to the FBI. Stan convinces her to think about it, and promises that they will take care of her and make sure her young son has a bright future in America.

Elizabeth heads back to Topeka to Stobert’s house, they spend most of the day in bed. It’s becoming pretty clear that Elizabeth is warming up to her mark now that she knows he’s not trying to starve Russia, instead he could save them. Stobert can tell that Elizabeth is stressed, so he makes her get out of bed so he can teach her Tai Chi to relax.

Gabriel meets with Claudia, he tells her that Mischa’s plane landed in Soviet union. Claudia is glad they dodged that bullet, but Gabriel is feeling guilty about hiding Philip’s son from him and sending him back home.

A Mary Kay consultant named Nancy shows up at the Jennings’ doorstep. Paige is thrilled by the woman, and clearly wants to let her in – but Elizabeth snaps that they’re not interested and shuts the door in the woman’s face. Paige is taken aback by how rude her mother was to the sales woman.

Elizabeth and Philip have their hands full, they meet with Gabriel to discuss their other mark – Morozov’s wife got a job teaching American CIA agents Russia. After their meeting, they are shocked when Gabriel announces that he has decided to go home to Russia. Gabriel is worried about Philip, but tells them that he will miss them both terribly.

The next day, Elizabeth puts on a disguise and heads to a psychiatrist’s office. She explains to Dr. Semel that a friend of her went to therapy and it helped her, so she wanted to give it a try. While she is there, she scopes out his filing cabinets and what kind of locks he has on them.

Later, Philip and Elizabeth sit down together, Philip thinks that Gabriel is hiding something from them. Philip stares off in to space and admits that he has been thinking about his childhood a lot lately, and having flashbacks to these older kids back home. Elizabeth thinks that Philip should talk to Gabriel about it before he leaves, he may be able to help him straighten out his past and what he remembers.

Meanwhile, Henry heads over to Stan’s to have dinner with him. He fills Stan in on his school work and being bumped up to an honors class, plus a girl named Kris that he’s been crushing on.

Philip meets up with Gabriel, he wants to talk about his father. All he knows about his father was that he was a logger, and he has very few memories of him. Gabriel confirms that Philip’s dad worked at a logging camp, but he wasn’t a logger, he was a guard at the penal camp. Philip wants to know if his father ever killed anyone, but Gabriel insists that he has no idea, he never knew Philip’s father. Unfortunately, Gabriel claims he doesn’t have the answers that Philip is looking for.

Later that night, Elizabeth checks in on Paige in her bedroom – she’s doing her homework and reading a book that Pastor Tim game her about communism. The book sparks a conversation about Elizabeth’s homeland, and Paige has a lot of questions about how the society works. Elizabeth admits that they have their problems, but “everybody is in it together.”

Philip returns home from his meeting with Gabriel and Elizabeth finds him sitting in the garage. Philip reveals what he learned about his dad, he worked at a prison camp. It bothers Philip that he doesn’t know anything about his parents at all.

Meanwhile, in Russia Oleg has been hard at work busting a food ring – it’s his job to make sure that foods from the farms are divided evenly among stores, orphanages, hospitals, etc.

After a long day at work, Oleg heads outside late at night for a walk. He takes out the paper that the CIA agents that were trying to get information from him gave to him, and he lights it on fire. Then, he burns the cassette tape with the recording of his and Stan’s conversation.

Tonight’s episode of the Americans ends with Elizabeth and Philip taking Paige to the safe house to meet their handler Gabriel for the first time.