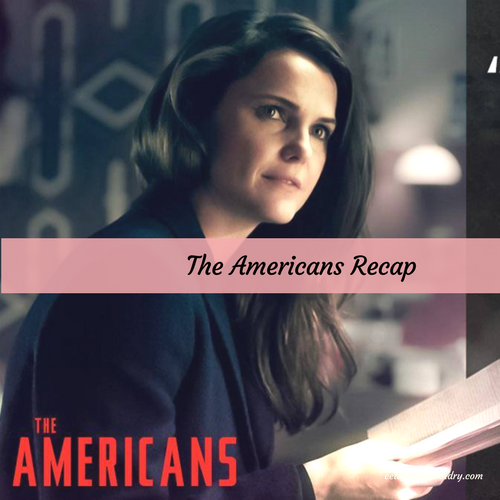 Tonight on FX The Americans airs with an all new Tuesday, April 18, 2017, episode and we have your The Americans recap below.  On tonight’s The Americans season 5 episode 7 called, “The Committee on Human Rights” as per the FX synopsis, “As Paige becomes even more enmeshed in her parents’ world, tensions with Matthew Beeman come to a head, Philip (Matthew Rhys) and Elizabeth’s (Keri Russell) honeytraps take surprising turns, and Stan faces the consequences of overplaying his hand at the FBI.”

Tonight’s episode of The Americans kicks off where we left off last week, Philip and Elizabeth Jennings have brought their daughter Paige to the safe house to meet their handler Gabriel, before he heads back home to the Soviet Union.

Gabriel is thrilled to finally meet Paige, he explains to her that her parents are heroes, and they have sacrificed themselves for the greater good. Gabriel commends Paige on how she has handled the shocking news about her parents’ secret lives.

At the FBI office, Stan and his partner receive a phone call from a Russian woman that they reached out to – apparently she is interested in working with them after they offered to make sure she and her son lived comfortably.

Later that night, Elizabeth throws on a disguise and heads back to the therapists’ office that she staked out in the last episode. She breezes past the doorman and sneaks upstairs and begins picking the locks on the filing cabinet. Elizabeth swipes a file called “Committee of Human Rights Moscow Edition.”

In the Soviet Union, Oleg returns home late at night. He tells his mom that he went to meet the CIA agents that are blackmailing him, and they never showed up. He’s puzzled about why they let him off the hook. But, his mom seems thrilled about the news.

Stan and his partner Dennis head to the park to meet the Russian woman they are trying to recruit as an informant. She wants them to promise that they can protect her son if she gets caught, but rather than lie, Stan is honest and says that he can’t guarantee that. The woman stomps off, and Dennis isn’t pleased that Stan blew the deal.

Philip returns home from Topeka, Paige is curious about what her parents are up to, they still haven’t told her what they found out – that America isn’t poisoning Russia’s grain. Paige thinks they should go to the press and expose what is happening like Watergate, but her parents tell her that it’s not an option.

Stan gets called in to his boss’s office – he learns that the CIA has decided to back off from Oleg. But, they aren’t happy about Stan basically blackmailing them. They higherups want Stan transferred out of counterintelligence. The only reason they are keeping him around is because they think he is sealing the deal with the Russian woman he met at the park.

After a heartfelt chat with the Pastor, Paige heads over to her boyfriend’s house. She bursts in to tears and cries that Matthew doesn’t know her and she can’t be his girlfriend anymore. Matthew is obviously blindsided, he tries to take her hand and talk to her but Paige snaps and pushes him across the room and storms out. Elizabeth’s mark

Elizabeth’s mark Stobert tells her that he has to go to Mississippi for work – they decide to tail him and see what he’s up to. To their surprise, they find him kissing another woman outside of a bar. It looks like Elizabeth isn’t the only being unfaithful in their sham of a relationship. Elizabeth is obviously a little upset that her fake boyfriend is cheating on her, and Philip can tell that she actually liked him. While Stobert is canoodling with his other girlfriend, Philip and Elizabeth head out to the grain field and dig up one of his super plants and steal it to send back home.

The next day, Elizabeth takes the grain plant to Gabriel and he’s thrilled. He compliments Elizabeth on how amazing of a young woman Paige is turning out to be. Talk turns to Gabriel leaving, Elizabeth doesn’t want to see him go. He’s leaving later that night, he tells her to send Philip to say goodbye.

Elizabeth returns home and finds Paige lying on the couch. She explains to her mom that she broke up with Matthew, she was tired of trying to hide things from him. Elizabeth commends her for making that decision, and raves about how proud she is of her. When Philip gets home, he checks in on Paige, he gives her a sweet pep talk and seems much more understanding than Elizabeth when it comes to matter of the heart.

After chatting with Paige, Philip heads back out to say goodbye to Gabriel before he leaves. Gabriel tells Philip they will probably never see him again. Gabriel reminisces about the horrible things that he did years ago for the organization – and all of the innocent lives that he took. He believed he was doing it all for the good of the people. Before Gabriel leaves – Philip asks him something that has been bothering him, is Stan Beaman’s new girlfriend a spy? Gabriel scoffs that Philip is losing it, and as far as he knows that’s not the case.

As Gabriel is heading out the door, he tells Philip that he was right – he should keep Paige out of all of this.