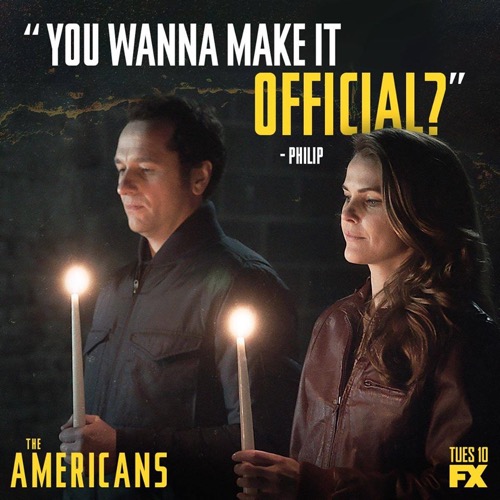 Tonight on FX The Americans airs with an all new Tuesday, May 16, 2017, episode and we have your The Americans recap below.  On tonight’s The Americans season 5 episode 11 called, “Dyatkovo” as per the FX synopsis, “A surprise announcement comes in from the Centre, which divides Philip and Elizabeth (Keri Russell) and creates a moment of crisis for them. Elsewhere: Stan gives Henry a tour of the FBI.”

Tonight’s episode of The Americans kicks off with Phillip at home with Henry – Elizabeth’s gone and he’s not sure where she went. Henry questions his dad about the elite boarding school he applied to. Phillip says that if Henry gets in, it’s fine by him if he goes, but he needs to talk to his mother. Phillip puts on his disguise and heads over to the safe house to watch TV and eat dinner with Tuan. He stares off

Phillip puts on his disguise and heads over to the safe house to watch TV and eat dinner with Tuan. He stares off in to space while the TV is on and has more flashbacks to his childhood. The visions are vague, and just clips of someone walking on a dirt floor. Later Phillip and Elizabeth meet up with Claudia. She briefs them on a woman named Anna, the Center has been looking for her for years,

Later Phillip and Elizabeth meet up with Claudia. She briefs them on a woman named Anna, the Center has been looking for her for years, apparently, she was a collaborator who was on the Nazi execution squad. They think that she’s living in the US in Massachusetts and hiding behind the name of Natalie. They aren’t certain that it’s her though because there’s no paper trail of her arriving in the US. Claudia hands them an old black and white photo and tells them to research the woman and find out everything that they can.

Before they leave, Claudia reveals that she looked in to the Lasso virus that they recovered from William’s body. The Center did harvest it and use it as a lethal weapon. They named the weapon Variant V, after William’s Russian name.
Phillip and Elizabeth put on their disguises and head out to do some surveillance. While they are in the car, they discuss Henry going away to school. Elizabeth thinks that it’s a good thing, but Phillip clearly has reservations.

While Phillip and Elizabeth are out, Stan takes Henry to the FBI office with him to show him around. Henry’s writing a school paper and doing some research, Stan introduces him to his partner. Henry is impressed by the office’s secure vault and mail robot.
Elizabeth and Phillip spot Anna, the woman that they are investigating. Elizabeth hops out of the car to follow her down the street.
In Moscow, Oleg is out with his partner. After a long day of regulating food supplies, he invites his partner to go to the grocery store with him on their way home – but he turns him down.

Henry returns home, thrilled about his trip to the FBI office. He brags to his parents about all of the cool stuff at Stan’s office and then heads upstairs to write his paper. Elizabeth and Phillip head to the dark room to develop photos they snapped during the day and to compare them of the black and white photo Claudia gave them. Elizabeth thinks that they may have finally found the elusive Anna.
The next day they meet up with Claudia to fill her in on their findings and show her the photos that they snapped.

Later, Phillip and Elizabeth get a cryptic message from the Center, telling them to “go ahead” with Anna. Phillip feels uneasy, he’s not certain that the woman they found in Massachusetts is really Natalie. Phillip doesn’t want that on his conscious if they are wrong.

Stan and his partner head to the apartment complex to meet up with their new spy. She fills them all in on the Russian general named Yuri that has been coming around her office. It’s pretty clear that she is developing feelings for him, but she promises Stan that she will be careful.

Phillip and Elizabeth put on their disguises and head to Massachusetts late at night, they spot Natalie/Anna returning home from work and heading in to her house.

She explains that when she was 16 years old, her entire family was killed by Nazi’s. But, the Nazi’s spared her life and took her in. She cries and admits to her husband that she killed Soviet prisoners whiles she was with the Nazis, then when the war was over, she came to the US and changed her name.

Phillip draws his gun, but he can’t pull the trigger, he was moved by Natalie’s story and appears to sympathize for her. Finally, Elizabeth pulls out her own gun and shoots and kills Natalie and her husband in cold blood.
The Jennings’ ride home in silence. Finally, Elizabeth announced that she wants to get out here, and go home. Phillip and Elizabeth have had enough.