BY Amanda Austin on May 9, 2017 | Comments: Leave Comments
Related : Uncategorized 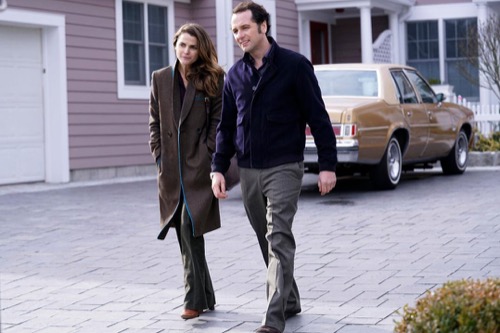 Tonight on FX The Americans airs with an all new Tuesday, May 9, 2017, episode and we have your The Americans recap below.  On tonight’s The Americans season 5 episode 10 called, “Darkroom” as per the FX synopsis, “Paige’s snooping leads Philip and Elizabeth (Keri Russell) to make a choice that could shift the balance of their lives forever. Also: Stan and Aderholt’s recruitment of Sofia suddenly bears fruit.”

Tonight’s episode of The Americans kicks off with Phillip, dressed in a disguise, having beers with his mark Alexei. They chat about their wives and sons. Alexei confesses that he’s worried about his son Pasha, he’s been miserable since they arrived in the States, he doesn’t even talk anymore. He confides in Phillip that he misses living in Moscow.

Tuan, the teenage spy that has been working with Phillip and Elizabeth returns to the safe house. Elizabeth gives him a pep-talk. Tuan updates them on bullying Pasha at school.

Elizabeth and Phillip head home, they are surprised to find Paige up in the middle of the night cleaning the kitchen floor. Paige’s upset, she read the Pastor’s diary while she was babysitting at his house, and he wrote about her. Apparently, Pastor Tom wrote that he’s worried about Paige’s soul, and thinks that her parents’ lies really screwed her up.

Meanwhile in Moscow, Oleg is still concerned about the Soviets searching his house. He confides in a friend and searched for advice, but Oleg’s friend doesn’t exactly boost his confidence, and tells Oleg that if they searched his house they must have something on him.

Stan and his partner meet with their new spy. She’s thrilled that they rented an empty apartment in her building as a meeting place so she will be safe and won’t get caught. She fills them in on her job, and says that she is getting close to a powerful defenseman from the Soviet.

Phillip and Elizabeth head to the safehouse. They heard that a hemorrhagic fever was used to kill Mhuajadeen in Bazni, and they are certain that it was the Lasso fever sample they sent to the Centre. The Centre said they were using it to develop a defense, not kill people. Claudia insists that she doesn’t know anything about it.

Elizabeth changes the subject – she asks Claudia if the Centre would be able to find Pastor Tim a job at a reserve or peace corp, far away from Paige. Claudia agrees to look in to it. Then she briefs them on the test results from the wheat they stole from the greenhouse. The Centre is thrilled, and they already have scientists working on it, but this is a long term project and that means that Phillip and Elizabeth are going to have to keep their marks Stobert and Kemp around for possibly years.

Phillip and Elizabeth head home and sit down with Paige. They fill her in on their plan to get Pastor Tim a job offer in another country. Paige doesn’t seem thrilled about the idea, she thinks that its weird to do it behind his back.

Elizabeth puts on her disguise and has tea with Alexei’s wife. She is upset about her son Pasha, she explains that he’s being bullied by kids at school and her family is falling apart. She breaks down in tears and confesses that she has been cheating on Alexei with one of her students.

Later that night, Elizabeth and Phillip go out to dinner with Stan and his new girlfriend. Phillip is still convinced that Stan’s new girlfriend in a spy sent from the Centre. Elizabeth thinks he’s being ridiculous, and shouldn’t care this much. He confesses that he doesn’t want Stan to wind up hurt like Martha was.

The next day, Phillip heads to an EST meeting. He heads home and shares what they discussed at the meeting with Paige. He tells her not to take what Pastor Tim said seriously, that she can change who she is whenever she wants. Paige goes to work at the food pantry and spends an awkward afternoon with the Pastor.

Phillip takes Elizabeth out late at night for a surprise. He shows her the marriage certificate that the Centre gave them year ago when they came to the United States, there’s a flashback of a much younger Phillip and Elizabeth.

Phillip leads Elizabeth into an abandoned building where a Russian priest is waiting for them in a his rob with candles lit. He speaks in Russian, and performs their wedding rituals from back home. At they end, they take hands and step forward on to a sacred cloth together while the priest blesses them and pronounces them man and wife.

After they are officially married, the bride and groom head home together. They hide their wedding bands in their safe and share a kiss.

Alexei’s wife is picking up her clothes from the dry cleaner when a woman corners her on the street and begins speaking in Russian. She tells her that her and her family is always welcome to return to the Moscow, there’s no hard feelings about the way they left. She’s obviously shocked by the woman confronting her.

Later that day, Paige returns home from babysitting. She gives her parents a camera and says that she took pictures of Pastor Tom’s diary for them – and she wants them to find him a job in South America. They take Paige to their secret room in the garage, and begin developing the photos themselves. Paige watches, her interest is definitely piqued. The three of them stand in the dark room and read the diary pages in silence. Pastor Tom writes that the Jennings’ are monsters and what they have done to Paige is worse than sexual abuse, he fears that the damage is done, and not even faith can save Paige.