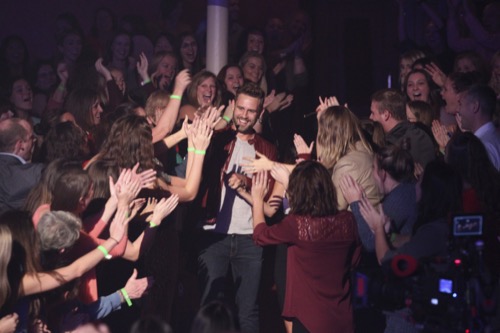 The Bachelor 2017 airs on ABC this evening with an all new Monday, January 23, 2017, season 21 episode 4 and we have your The Bachelor recap below. On tonight’s The Bachelor season 21 episode 4 as per the ABC synopsis, “An upset bachelorette confronts Nick Viall about his forward behavior with another woman; the ladies visit Nick’s hometown of Waukesha, Wis.; Nick selects a group of women to test their skills as ranch hands; a shy bachelorette spends a day with Nick’s family and opens up about her past heartbreak, which allows Nick to see a fiery side to her he never thought possible; country singer Chris Lane performs during a romantic dinner.”

Tonight’s episode of The Bachelor kicks off where we left off last week – at the pool party. The girls are all furious because Nick ditched them to go make out with Corinne in their private bounce house. Meanwhile, Corinne is upstairs taking another nap, and oblivious to how upset everyone is with her.

Vanessa Grimaldi confronts the situation head on and tells Nick that his private sessions with Corinne aren’t cool. It seems like Nick just wants somebody to “f—k around with” and he isn’t looking for a wife. Nick reassures Vanessa that he cares about her and tells her to be patient.

Taylor and Sarah go upstairs and wake Corinne up so they can chat with her. Sarah explains that the other girls in the house feel like Corinne has been disrespectful, and they are tired of her running around and acting so entitled and privileged. Corinne brushes them off and isn’t trying to hear what they have to say. Corinne knows that she isn’t everyone’s cup of tea and she’s cool with it.

Chris Harrison arrives and announces that it is time for the rose ceremony. The girls line up, and they are certain that Nick is going to send Corinne home.

That means that Brittany and Christen aren’t getting roses this week and they are officially eliminated from The Bachelor.

After the rose ceremony, Corinne decides to make a speech. The girls roll their eyes as Corinne goes on and on about how lucky and “privileged” they all are to be on the show and dating Nick. Corinne is manipulating everyone like they are her puppets.

The next morning, Chris Harrison arrives at the mansion and he has a surprise for the girls. He tells them to all pack their bags – they are heading to Nick’s hometown of Milwaukee.

Nick arrives in his home town and grabs lunch with his parents and they chat about his new gig as The Bachelor. Nick is curious to see what his family thinks about the girls, his dad jokes that he hopes Nick finds love this time – because his family is tired of seeing him on the show.

After meeting with his parents, Nick heads on his first 1-on-1 date with Danielle L. They start their date with a tour of the town. Nick takes Danielle on a little trip down memory lane and shows her where he used to hand out when he was a kid.

They stop by a local bakery and get to make their own cookies. The bakery actually has a cookie named after Nick called the “Nickerdoodle.”

Nick and Danielle awkwardly run in to one of Nick’s exes – a girl named Amber. They join her at a café and Amber and Danielle talk about Nick. They finish the date off with a romantic dinner and Danielle opens up to Nick about her parents’ divorce and her past relationships. At the end of the date, Nick gives Danielle a rose.

Back at the hotel, another date card arrives. It’s a group date and Rachel, Alexis, Vanessa, Jasmine, Jaimi, Sarah, Whitney, Kristina, Astrid, Taylor, Josephine, and Corinne will be going. Raven is the only one not on the date card – that means that she is getting a 1-on-1 date.

The group date kicks off bright and early – Nick and the girls head to a local dairy farm and learn how to feed the cows and milk them. Everyone is having a blast, until it comes to shovel the manure. The girls are good sports, but Corinne throws a fit. She refuses to help “shovel the poopy” because her hands hurt and she spends the rest of the date sitting on the sidelines.

After a long day on the farm, Nick and the girls get cleaned up and have a cocktail party. Nick spends some 1-on-1 time outside with Kristina. They haven’t had a lot of alone time together, but Nick reassures her that she will get a chance to share her story and her past with him too.

Meanwhile inside all hell is breaking loose. Corinne overhears the girls complaining about her…again. And, she decides to confront them. Sarah accuses Corinne of being too immature, and not ready to marry a 36 year old man because she likes to play in pink bouncy houses. Thinks get uncomfortable quickly, and it’s pretty clear that Corinne doesn’t have a single friend in the house.

Outside, Nick is cuddling on a bench with Vanessa Grimaldi and completely unaware of all of the drama inside. Vanessa shares a book with him that her students made about her for Nick. It’s full of cute photos and reasons why Nick should marry Vanessa.

Kristina calls Corinne out about missing the rose ceremony a few weeks ago. Corinne argues that she had a panic attack and fell asleep. Kristina snarks that isn’t an excuse and all Corinne had to do was stand there and get a rose.

Corinne tracks down Nick and talks to him about the issues she is having with the girls. She reassures him that she addressed the situation and told the girls to stop whispering behind her back and be adults. At the end of their convo, Nick doesn’t kiss Corinne, which worries her a little bit.
Nick gathers all the girls around, it’s time to hand out the next group date rose. Corinne is shocked when Nick gives the date rose to Kristina.

The next day, Nick takes Raven on their 1-on-1 date to the park. Nick’s little sister Bella is having a soccer game. Bella and Raven warm up to each other very quickly. In the middle of the game, Nick puts Raven on the spot and introduces her to his parents. Raven is a hit with the Viall Family and the date is going smooth.

After Bella’s soccer game, she invites Nick and Raven to go to the skating rink with them. While Nick is out showing off his moves on his skates, Bella quizzes Raven about her intentions with Nick and whether or not she wants to have kids. Raven is up to the challenge though.

Raven and Nick top off the night with a romantic dinner, Raven reveals that her last relationship ended because her boyfriend cheated on her. But, it was for the best, because now she knows her self-worth and what she brings to the table. Nick is really in to Raven and loves how sassy she is, at the end of the night, he gives her a date rose.

Tonight’s episode of The Bachelor ends tonight with Nick and the girls having a cocktail party before their rose ceremony in Milwaukee. The girls are in rare form tonight – Corinne is fed up with Taylor’s attitude. She decides to confront Taylor, and freaks out when Taylor says she doesn’t have “emotional intelligence.” Corinne snarks that she is tired of Taylor being “Miss Proper” and implying that she is stupid. Corinne shouts at Taylor that she’s not “f—king stupid and runs a multi million dollar company.”
It looks like next week is going to be a crazy one…