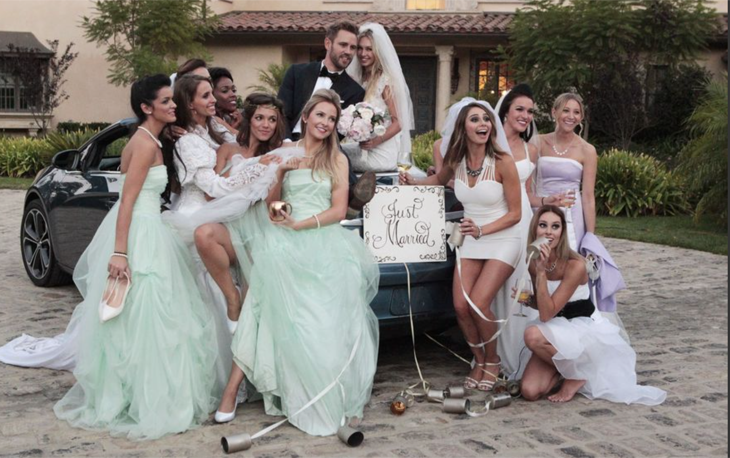 The Bachelor 2017 airs on ABC this evening with an all new Monday, January 9, 2017, season 21 episode  2 and we have your The Bachelor recap below. On tonight’s The Bachelor season 21 episode 2 as per the ABC synopsis, “One anxious bachelorette hides her secret history with Nick; 12 ladies attend a wedding photo shoot with Nick; Nick whisks away one lucky gal to a private yacht; Nick meets six women at Hollywood’s Museum of Broken Relationships where each lady acts out a breakup with Nick; Nick does something shocking that no one could have expected.”

Tonight’s episode of The Bachelor kicks off at Bachelor Mansion – Nick Viall’s 22 remaining girls wake up refreshed and thrilled that they made it through the first rose ceremony.Chris Harrison pays the girls at the mansion a visit first thing in the morning. He explains that this week there will be two group dates and one 1-on-1 date. He warns them that since there are so many

Chris Harrison pays the girls at the mansion a visit first thing in the morning. He explains that this week there will be two group dates and one 1-on-1 date. He warns them that since there are so many girl, not all of them are going to get to spend time with Bachelor Nick.

The girls pile in to cars and head to their very first group date. Nick Viall is waiting for them, he has a photo shoot set up in an elegant and scenic back yard. Nick explains that today they will be taking practice wedding photos – which means that each girl will be wearing gown and posing with Nick as the groom. Of course, it’s not that simple, each photo has a theme like “80’s theme and shotgun wedding.”

Some of the girls are devastated when they realize that there aren’t enough wedding gowns and some of them have to pose as bridesmaids.

Alexis isn’t too happy with having to wear a faux baby bump, but she rocked the dolphin costume well, so maybe she can pull it off. While everyone is getting their hair and make-up done, Corinne can’t stop bragging about the fact that she has already kissed Nick.

Brittany got stuck playing “Adam & Eve Bride.” She’s stuck wearing a biking made out of leaves and using her hair to cover her boobs. When Corinne sees Brittany’s “gown,” she starts panicking – Brittany looks HOT and Nick is sure to notice. The

The brides head back outside to get their photo shoot where Nick is eagerly waiting for them. The girls sit on the sideline and snark about each other and drool over Nick while they take turns snapping photos with the photographer. Alexis is sure that she will be the winner, after all she’s having his baby.
Meanwhile, Jasmine is a bridesmaid, but she still manages to make out with Nick for one of the photos.

Then, she sets a trend, and half a dozen more girls decide they want to make out with Nick for their photos too. Corinne is a hot jealous mess watching Nick with the other girls.

Corinne is determined to one-up the other girls and win some extra 1-on-1 time with Nick. So, for her photo shoot she opts to get in the pool and take off her top and has Nick hold her breasts for the photo. The other girls watch in horror, they can’t believe that Corinne went that far. And, they are shocked when the photographer announces that Corinne in the winner of the challenge. Corinna and Nick ride off together in a car that says “Just Married.”

Later that night, they cap off the group date with a cocktail. Of course, Corinne steals Nick right off the bat and they go out back to kiss. Corinne is already rubbing all of the other girls the wrong way. They think that she is over doing it a bit and acting “too sexual.”

Back at the mansion, another date card arrives. Liz is certain she is going to a 1-on-1 date since she already slept with Nick Viall months ago. But, she’s wrong – the date card invites Danielle M. on a 1-on-1 date.

Back at the group date, things are getting awkward. Corinne is being disrespectful and interrupting the other girls while they are with Nick. Corinne rants at the other girls that if they were really here for Nick, then they would be trying to talk to him as much as she is. Then, she calls out “Cheer’s Bitches” and takes another drink. It’s hard to tell if Corinne is drunk, or just that horrible of a person.

Corinne freaks out when Taylor has the nerve to interrupt her third time with Nick – the nerve of her.

At the end of the super awkward group date, it’s time for Nick to hand out the group date rose. It’s only the first date of the season and the girls are already at each other’s throats. Nick announces he is giving the group date rose to Corinne, which only causes more hard feelings.

The next morning Nick and Danielle M head off on their 1-on-1 date, they board a helicopter and fly off to a private yacht in the middle of the ocean. Danielle is from Nick’s hometown – so he already feels a connection to her, he misses down to Earth Mid-Western girls.

Back at the mansion, Liz is dying to tell someone her dirty secret – she met Nick at Jade and Tanner’s wedding and hooked up with him 9 months ago. Liz takes Christen aside and confesses to her that she slept with Nick. She can’t wait to tell someone all the details. Liz laughs that she shut down Nick and wouldn’t give him her number – so then why is she here now?

Back on their date, Danielle and Nick top it off with a romantic dinner and a kiss. Danielle opens up to Nick and reveals that she was engaged in the past but her fiancé passed away due to an overdose. Nick is moved by her story and gives her the date rose, then they take a ride on a ferris wheel and share their first kiss.

The final date card arrives at the mansion. Christen, Josephine, Astrid, Jaime, Christina, and Liz are going on the next group date. Liz is thrilled, she’s been waiting all day to get some time with Nick so that they can talk about their drunk hook-up.

Nick takes the girls on his group date to the Museum of Break-ups in Hollywood – the bizarre museum is full of tokens of stranger’s broken relationships. Nick uses the opportunity to discuss his break-up with Kaitlyn Bristowe.

Now, it’s time for one of the most super awkward group date activities ever. The girls all take turns fake breaking up with him…for ridiculous reasons. Kristina dumps him because he doesn’t brush his teeth. Astrid dumps him because he is cheating on her with all of the other girls. Josephine decides to go for the gold and slaps Nick across the face during their fake break-up.

Liz decides to use her fake break-up to read Nick a super long letter about how she met him at Jade and Tanner’s wedding and he didn’t fight for her. Everyone is super confused. There is a super awkward silence. Finally, Liz gets off the stage and takes her seat. Nick is obviously not happy that Liz just shared the whole past with all of the girls.

After the group date, the girls and Nick have a cocktail party. The girls all take turns trying to connect with Nick – but he is a little distracted because he can’t stop thinking about the things that Liz said earlier. He doesn’t want the other women to think that he is keeping a secret from them.

Nick has some 1-on-1 time with Christen – Christen reveals that she knows he hooked up with Liz and Nick is obviously thrown off.

Nick finally corners Liz and they talk in private. Nick accuses Liz of using their past to get on TV. He points out that she could have had him months ago and she shut him down. Liz tries to argue that Nick didn’t reach out to her either after their one night stand.

Nick begins stuttering – he explains to Liz that he thinks it is best for her to leave the show, he doesn’t think that he and Liz have a future together. He already likes some of the other girls more, and he has’t even slept with them yet.

After Liz leaves, Nick decides that it is best to come clean to the other girls and tell them the truth about his past with Liz. He abruptly announces to the rest of the girls on the group date that Liz went home, and he had sex with her at Jade and Tanner’s wedding.