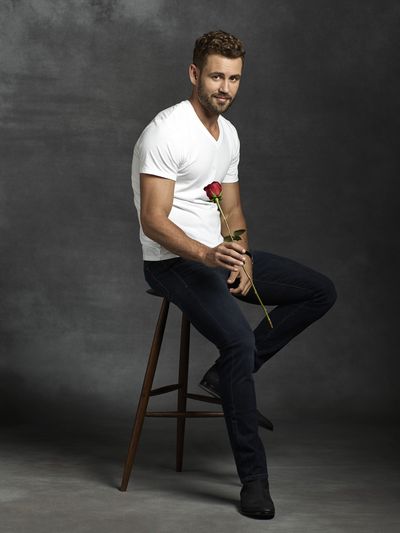 The Bachelor 2017 airs on ABC this evening with an all new Monday, February 27, 2017, season 21 episode 9 and we have your The Bachelor recap below. On tonight’s The Bachelor season 21 episode 9 as per the ABC synopsis, “Andi Dorfman surprises Nick just before he hands out roses to three of the four remaining bachelorettes. From there, Nick and his final three travel to Lapland, Finland, for a week of cold, snowy days and warm, romantic nights.”

Tonight’s episode of The Bachelor kicks off where we left off last week – Nick is in his hotel room preparing the rose ceremony, and there’s a knock at the door. The Bachelor opens the door and is shocked to see his ex Andi Dorfman standing there.

Nick Viall awkwardly invites Andi in for a drink – but it’s clear he’s not excited about seeing her. Meanwhile, outside Chris Harrison is greeting the final four girls as they arrive in their limos and getting them lined up for the rose ceremony. Vanessa Grimaldi is a ball of nerves, and can’t stop crying after their disastrous hometown date.

Upstairs, Nick is telling Andi Dorfman that he is down to the final four, and how much he likes the women. Andi cracks sarcastic jokes. Nick reveals to Andi that he’s not sure if he is going to actually propose to any of the girls yet, and he’s not going to ask someone to marry him just because she’s the last one standing. Isn’t that the entire premise of the show?

Andi asks Nick if he is going to have any sex with the girls during the fantasy suite dates. Andi thinks that if Nick sees a future with any of the girls, then he shouldn’t hold back and should be intimate with them. They share some awkward goodbyes, and Nick apologizes for embarrassing Andi when she was the Bachelorette and announcing on live TV that they slept together. Basically, Andi Dorfman just stopped by to make sure fans of Bachelor Nation still knows who she is.

It’s finally time for the rose ceremony. Vanessa Grimaldi, Rachel Lindsay, Corinne Olympios, and Raven Gates are all lined up and waiting for Nick Viall. Nick finally arrives, and hands out roses to Rachel, Raven, and Vanessa. Corinne Olympios is officially eliminated from The Bachelor. Nick walks Corinne to the car, and she cries the entire way. She sobs that she’s sorry for whatever she did to make Nick send her home. He gives her a pep-talk and puts her in the limo and sends her on her way.

Nick Viall and the final three women jet off to Finland for the fantasy suite dates. Nick doesn’t seem too upset about leaving Corinne behind. It’s a little odd that he was balling his eyes out when he sent home girls weeks ago, but was laughing and cracking jokes when he sent home Corinne Olympios.

Raven Gates is the lucky lady that gets the first date in Finland. Nick picks Raven up in a helicopter, and they take an aerial tour of a snowy national park. Raven has a lot going on in her head while they are up in the air, she’s determined to make today count and finally tell The Bachelor that she loves him. After their tour, Raven and Nick have a pretty low-key afternoon at a local pub, having drinks and playing darts.

Later that night, Raven and Nick meet up for a romantic candle-lit dinner. Raven confesses to Nick that she has never told any guy that she loves him before, not even her ex-boyfriend, and they were together for two years. Raven is so nervous that her hand is shaking as she confesses that she has feelings for Nick, she emotionally professes her love for Nick, something she wishes that she had done weeks ago. Of course, Nick doesn’t say that he loves her back, but he does plant a kiss on her and tell her how sweet she is.

At the end of dinner, a date card arrives, inviting Nick and Raven to stay in the Fantasy Suite. Raven happily accepts, then she warns Nick that she has only ever had sex with one other guy, and he never made her orgasm. Nick is obviously a little taken aback by her confession, and they head to their Fantasy Suite cabin and crawl in to bed to look at the stars through the glass ceiling in their cabin.