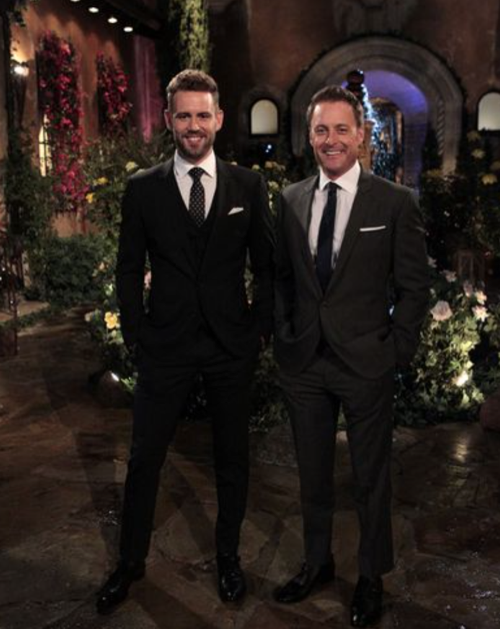 The Bachelor season 21 one hour special airs on ABC this evening with an all new Sunday, January 1, 2017, episode and we have your The Bachelor recap below. On tonight’s special episode called, “Countdown to Nick” as per the ABC synopsis, “A look at Nick Viall, the newest Bachelor; an introduction to some of the 30 bachelorettes who will vie for Nick’s affection; highlights from past “Night One” arrivals; updates on Bachelor couples; introductions to babies born to Bachelor parents.”

Tonight’s special episode of “The Bachelor: Countdown To Nick” kicks off with host Chris Harrison. If you’re a member of Bachelor Nation, then you are very familiar with Nick Viall, he appeared on not one, but two episodes of The Bachelorette and on Bachelor In Paradise. Chris Harrison shares a clip of a look back at Nick’s searches for love so far on the series, featuring both Andi Dorfman and Kaitlyn Bristowe.

Tomorrow night, we will finally get to meet Nick Viall’s girls, and see their hilarious limo arrivals. Chris Harrison shares a clip of the top 10 most hilarious limo entrances of all time. We get to see Claire Crowley meet Juan Pablo with a faux baby bump, the twins climbing out of their limo to meet Ben, Amal introducing himself to Andi Dorfman as “Anal,” and Kaitlyn Britowe telling Chris Soules that he can “plow her farm any day.” The number one most hilarious limo entrance of course goes to Sean Lowe, one of his girls arrived in a full wedding down.

Now, it’s time to get a sneak peek at some of Nick Viall’s girls in Season 21. Corinne, a 24 year old business owner of Miami, Florida. Corinne is utterly obsessed with Nick, and has watched him on previous seasons of The Bachelorette.

Jasmine, a 29 year old professional dancer from San Francisco. She thinks Nick Viall has gotten a bad rep on The Bachelorette, she is impressed by how much he has grown over the years and the fact that he hasn’t given up on searching for love.

Raven Gates is a country girl hailing from Arkansas, she’s a small town girl who believes in “family, faith, and football.” She’s devoted her life to running her own boutique, but she is ready to find love and thinks Nick Viall is the guy for her. Rachel Lindsey is a Dallas girl, and an

Rachel Lindsey is a Dallas girl, and an attorney, sounds an awful lot like Nick Viall’s ex Andi Dorfman.

Vancouver native Hailey has had a horrible dating track record. Her ex-boyfriend broke up with her because he wanted a pet bird instead. Hailey got some advice from her fellow Canadian Daniel, who has had some experience on The Bachelorette and Bachelor In Paradise.

Of course, it wouldn’t be an episode of The Bachelor without a virgin, cue wedding videographer Christen. She has chosen to follow her faith and wait until she is married before having sex. She thinks Nick might be the lucky guy.

Nick will see a familiar face this season, a girl named Liz will meet Nick tomorrow night when she climbs out of her limo, but it won’t be for the first time. Apparently, she hung out with Nick at Jade and Tanner Tolbert’s wedding. Liz teases that the alcohol was flowing, and she and Nick were together all night. When the producers ask Liz if she slept with Nick after the wedding, she “pleads the fifth.”

Nick may not have found love on The Bachelorette, but plenty of other people have. Before tonight’s special episode ends – Chris Harrison has a special treat for fans. A video catching up with former couple Desiree Hartsock and Chris, they have a beautiful baby boy named Asher. Ashley and JP Rosenbaum just celebrated their 5th wedding anniversary and they have a handsome son named Ford, and a baby girl named Essex.

Former Bachelorette Kaitlyn Bristowe and Shawn Booth are still together, and living together in Nashville, Tennessee. But, they still haven’t set a wedding date. Kaitlyn jokes that maybe this year they will finally start planning their wedding.

Ben Higgins and Lauren Bushnell got engaged on last season of The Bachelor. They are living together – but they still haven’t set a wedding date. Lauren says the next chapter in their love story is getting a dog together.

All of The Bachelor and Bachelorette alums are thrilled for Nick Viall, and they are sure that the fourth time is the charm and Nick will finally find love.

Tonight’s special episode of The Bachelor ends with a sneak peek of Nick Viall as the Season 21 Bachelor – and it looks like this season will be amazing and you aren’t going to want to miss a single second of the drama!