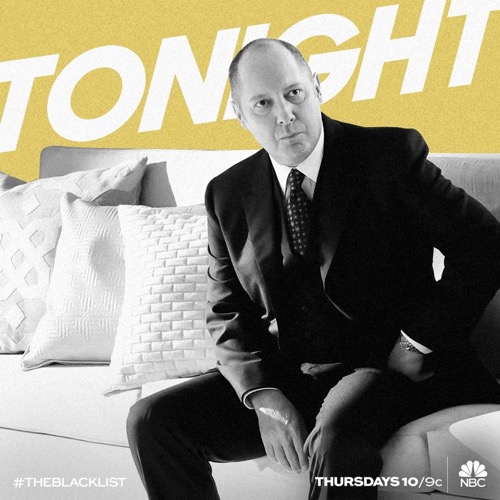 Tonight on NBC their hit drama The Blacklist starring James Spader airs with an all-new Thursday,  January 12, 2017, episode and we have your The Blacklist recap below. On tonight’s Blacklist Season 4 episode 10 called, “The Forecaster,” as per the NBC synopsis, “A mysterious diorama depicts a future crime. Elsewhere, Red (James Spader) explores a new business opportunity.”

Tonight’s episode of The Blacklist kicks off with Liz and Tom moving in to their new apartment, they’re thrilled they don’t have to live in the safe house any more. Tom is staying home and setting up the new house with Agnes while Liz heads back to her first official day at the FBI as a reinstated agent.
Liz walks out the door and finds a creepy box on her front step. It’s a shadow box of a faux swimming pool with a clay figure of a tiny woman drowning. There’s a note attached to it that says “Save Her.”

Liz takes the bizarre diorama to the office. Federal Judge Trisha Culpepper drown earlier that morning in a swimming pool. Ironically, the clay figure that Liz received is a spitting image for Culpepper and a perfect replica of the crime scene. Someone already knew that Trisha was going to drown to death.

Harold sends the diorama off to get fingerprinted and checked for DNA. He sends Harold and Agent Navabi to the crime scene to check it out.

Red and Dembe are looking at an apartment. Liz tracks them down. She thanks Red profusely for getting the President to pardon her. Liz fills Red in on her new case. Red is worried, he thinks Liz might be in danger. He warns her not to take the case lightly, she is being taunted by a killer who knows where she lives.

Back at the apartment, Tom is singing to baby Agnes and he hears someone outside the door. He opens the door and there is another diorama crime scene sitting outside. He rushes down the hallway to try and stop the person that left it, he leaves baby Agnes inside all alone and rushes back upstairs to make sure she is okay. The baby is still sitting in her swing, unharmed. But the killer got away.

Ressler and his team begins analyzing the new diorama. Amar thinks that the crime scene is infront of the old post office. They rush to the location to try and stop the next death.

Red is up to something – he moves in to an odd apartment, he says it belonged to an old friend of his, who was murdered by a man named Iniko. Red calls one of Iniko’s men to his new apartment and tries to get him to switch teams and work with him rather than Iniko.

The entire FBI is stationed around the post office. All they know is that they are looking for someone on a bike. The problem is, there a dozens of people riding around on bikes in that area of town. Liz gets a phone call from the lab, they got a fingerprint off the diorama, it belongs to a women named Fiona Driscoll. A motorcycle rides by and Liz tackles an innocent bystander before the biker can shoot and kill them.

Red meets with Iniko, he lies and says that Iniko’s man Jeffrey wanted to betray him. Odd, it was the other way around.

At the FBI office, Liz and Ressler question their suspect Fiona Driscoll. She swears she isn’t a killer. Fiona says that the dioramas are premonitions of crime scenes and she left the dioramas at Liz’s door so that she could stop the murders. Fiona takes Liz and Ressler to her house – she shows them 40 new dioramas of crime scenes and deaths to come. Liz and Ressler are shocked when they learn that Fiona isn’t the one having the premonitions, it’s a young 9 year old girl named Maggie that is making the creepy dioramas.

Maggie is “different,” the doctors blame her issues on birth defects, she’s actually mute. Fiona explains that Maggie started having premonitions 2 years ago. Maggie is busy drawing a new diorama while Fiona chats with Liz.

They take the dioramas back to the FBI office, all 40 of them check out and match to recent crimes or accidents. Harold is skeptical, he doesn’t believe in premonitions. He orders Aram to get Maggie’s medical files, and tells Navabi to track down everyone who is in contact with the girl. He thinks that someone is feeding her information.

Aram and Navabi have a hunch, Maggie wears a tiny high-tech hearing aid. They think that Maggie’s hearing aid is picking up phone calls on another frequency and that is where she is getting her premonitions from.

Aram has a plan, they head to Maggie and Fiona’s house. They turn off all of the lights and appliances that may cause interference so that they can listen in on Maggie’s hearing aid. Aram was right – Maggie isn’t having premonitions, she’s hearing nearby phone calls, and that means that whoever killed the judge and tried to commit a murder in the park is nearby and within range.

Meanwhile, Red is knee deep in his latest scheme. He turns Jeffrey and Iniko against each other, Iniko shoots and kills Jeffrey on Red’s new white carpet. Red is uninterested in Iniko’s cobalt mines though, he wants revenge, Iniko killed one of his friends. The killer gets away, but the FBI gets a lucky break and

The killer gets away, but the FBI gets a lucky break and are able to ID him, Benjamin Charnquist is a convicted rapist who spent some time in San Quentin.

Aram makes a shocking discovery – there’s a pattern in all of the dioramas, they are all somehow linked to fortune 500 companies and it looks like the murders that Ben has been committing have been making financial advisor Chris Farmsworth millions of dollars.

Chris and Ben have a getaway plan though, they knew this day would come and they would eventually get caught. While Chris is packing his bags, he orders Ben to make one last kill to secure their biggest deal.

It turns out all of Red’s scheming with Iniko was because he was looking to hire a new clean up crew to replace Kaplan. He shoots and kills Iniko and tests out a new crew, who just happens to be crime scene cleaners for the NYPD. They get every drop of blood out of the white carpet where Red shot Iniko, he looks forward to doing more business with them.

Liz and her team rush Farmsworth’s office, they are able to capture Ben, but Farmsworth is killed in the elevator in the process.

After a long day of work, Liz pays Red a visit. He knew all about Farmsworth, aka “The Forecaster.” People tried to get Red to invest with Farmsworth for years, but Red wasn’t interested.

Tonight’s episode of The Blacklist ends with Liz and Tom at home having a romantic dinner. Tom gives Liz a “gift,” it’s all of his old passports and fake identities. He’s determined to make their new life work, and he promises be open with Liz about missing his own life.

There’s a knock at the door, Dembe interrupts Liz’s dinner. He tells Liz that something is wrong, but he won’t come inside. Dembe whispers to Liz that he is worried about Red, he doesn’t recognize the man that he has become and he can’t reach him. Dembe reveals to Liz that Red killed Kaplan for helping Liz escape.