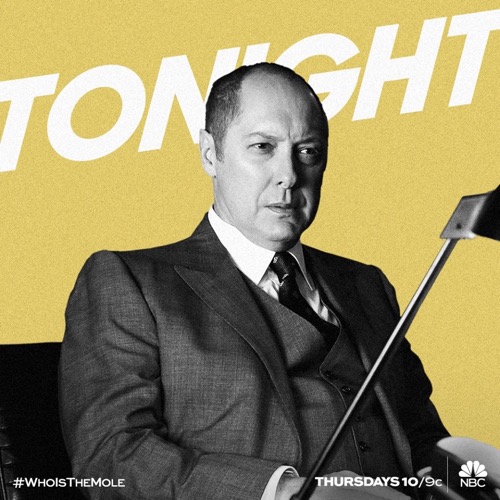 Tonight on NBC their hit drama The Blacklist starring James Spader airs with an all-new Thursday,  January 5, 2017, episode and we have your The Blacklist recap below. On tonight’s Blacklist Season 4 episode 9 Winter Premiere called, “Lipet’s Seafood Company,” as per the NBC synopsis, “Allegiances are tested when an investigation centers on an international terrorist operating in America. Meanwhile, Aram faces consequences when his girlfriend hacks into the FBI computer systems, and Red (James Spader) cashes in on a favor.”

Tonight’s episode of The Blacklist kicks off at a fishing dock, but there’s something shady going on in the backroom of the seafood processing plant. Men in lab coats are dissecting one of the fish and removing a microchip from it. Then, the fish dock and make-shift lab are raided by men in ski masks – they shoot and kill everyone working there.

Meanwhile, Liz and Tom are making a home video with baby Agnes, in their fake apartment inside a warehouse with their bodyguards standing outside. Tom worries about how growing up like this will affect Agnes.

Tom worries about whether Kirk is really dead. He confesses that sometimes he wonders about his parents. Liz wants to just focus on their present, and finding a new place to live.

Reddington is meeting with Harold – he’s furious that Red used FBI resources and he lost agents searching for Alexander Kirk and Red just did away with him.

Red says that it is time to focus on the future, not the past. Red fills Harold in on the fish dock heist. The police thinks it was a drug trafficking ring at the seafood place, but Red knows that’s not the case. Red shows Harold a photo of one of the men that were killed, he’s not a drug smuggler, he’s a renowned terrorist from Algeria named Hassan Arkani.

Harold is confused as to why terrorists were working out of a seafood plant in Maryland. Red says that when he gets more information, he will contact Agent Keen. Harold reminds Red that Elizabeth isn’t a FBI Agent anymore, thanks to Red.

After Red leaves, Harold briefs his team on Hassan Arkani. Whatever Hassan was working on, someone stole it, the microchip could contain valuable terrorism intel, and they have no idea who has it now.

After the meeting, Samar finds Aram having a meltdown. He is being investigated by the Justice Department about his former girlfriend turning out to be a spy. No matter how the cookie crumbles, Aram will either be considered a traitor or a moron for not realizing who he really was dating.

Ressler and Samar head to the seafood packaging plant. They find FBI agents there combing through evidence. They found a timing switch and think that whatever was being smuggled was being used to make a bomb.

Aram runs diagnostics on the timer chip – he has bad news for the FBI. The chip that Arkani was working on, was American made, which means that it is top of the line and very dangerous.

How did an Algerian terrorist get his hands on American warfare? They clearly have a security leak on their hands …

Harold takes Liz aside after the meeting. He says that he is making some phone calls and trying to get Elizabeth reinstated as an agent. After everything she has been through, she deserves it.

Ressler and Samar meet with Blackhawk Thorne, the American department that created the timing chip. They explain that the chip passed through several different divisions and dozens of people have worked on it, it’s part of a targeted missile bomb.

The Blackhawk leaders think that the FBI should look in to their former programmer, a man named James Maddox. Apparently, James had a drinking problem and he was fired. They find it hard to believe that Maddox would betray his country, but he did have financial problems and may have sold it to terrorists to make ends meet.

Meanwhile, Red gets a phone call from one of his connections named Wendy. She tells him that a terrorist group called the New Martyr Brigade is headed to the US. There are of them making their way through customs with fake visas, and they are being lead by a man named Farook. The NMR is coming to the US to get back the microchip that was stolen from them when the factory was raided and Arkani was killed.

Ressler and Samar are following their lead on James Maddox. When he sees the FBI agents, Maddox tries to make a run for it but he doesn’t get far before Ressler catches up to him and handcuffs him.

Aram heads to his meeting with the justice department, Harold tags along for moral support. He insists that he had no idea that Elise was a spy, and argues that he just has horrible taste in women.

Samar is basically looking for a needle in a haystack and is trying to track down the NMR men that entered the country.

James Maddock isn’t the security leak, it’s the leader of Blackthorn, Mr. Deavers. Deavers has a secret meeting with Farook, he is furious that he FBI is snooping around because the NMR lost the chip.

Meanwhile, Ressler executes a search warrant at Maddox’s house and finds a burner phone and proof he stole the chip hid in the apartment. Maddox swears that he is being framed and someone put the stuff in his apartment. Liz believes Maddox, she thinks that something is off.

Agent Samar Navabi is up to something, she meets with members of Mossad, they are the ones that stole the chip from Arkani to make sure that he doesn’t use it against their country. Samar warns them that the FBI is looking for the chip and they need to get out of the country ASAP, Farook just arrived. Samar promises to stall the FBI as long as possible.

Ressler and Samar are following up a lead and they are ambushed by Farook. Ressler manages to fight off two of Farook’s men and shoots them, but Farook kidnaps Samar and gets away with her.

Ressler rushes to the FBI office and tells them that Samar was kidnapped by the terrorists. They call Red for back-up and he explains to them that Samar must have been covering for Massod and Farook kidnapped her so that he can get his chip back from Massod.

The FBI is on a race against the clock to get Samar back before Farook tortures and kills her. Harold and Ressler team up with Massod, they convince them to set up a meeting with Farook to exchange the chip for Samar.

As soon as Mossod makes the drop, Farook releases Samar as promised. But, the terrorists were one step ahead of the FBI – they airlift the microchip away with a small drone before Ressler can get it back.

Resller begins frantically chasing the drone through the park. He tracks it to a nearby building and finds Farook with the chip. Ressler wrestles with Farook and pushes him in to oncoming traffic, he’s killed instantly and the chip is back in safe hands.

Red has spent the entire episode pulling strings and trying to get a meeting with the President before his inauguration. Red pops up and surprises Diaz – he reminds him that they had made a deal. Diaz tries to tell Red that their business is done, but Red won’t take “no” for an answer, he has one last favor that Diaz needs to do.

Back at the FBI office, Harold lectures Samar about where her loyalties lies – with her country or with the United States. He orders her to go home and think about whether or not she wants to continue taking orders from him and protecting the US.

And, the hits keep coming. Amar got cleared by the Justice Department, but he realizes that he has a horrible track record with women. After his break-up with Elise, he wants to take a break from relationships, so he is putting the breaks on whatever was going on between him and Samar.

At home, Elizabeth and Tom are sitting at home and they get a shock on television. The President just formally pardoned Elizabeth Cooper, it looks like that was the last favor that Red cashed in on from Diaz.

Samar is thrown off a bit by Massod and her ex-boyfriend Levi showing up. Tonight’s episode ends with her meeting with Levi before he heads home and telling him that she is staying in the US, because she found someone else and she is in love with him.

Tonight’s episode ends with Liz heading to Harold’s office and getting her badge back, she’s officially in the FBI again.