The Bold and the Beautiful Spoilers: 3 B&B Storylines Fans Want to See – Bombshells That Could Change Everything 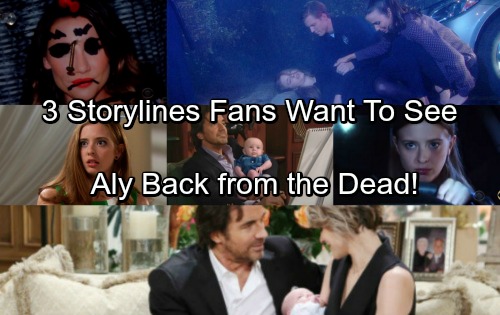 The Bold and the Beautiful (B&B) spoilers tease that the action revving up on the CBS soap. However, the show’s missing out on some great storyline opportunities. Viewers have strong opinions about what they’d like to watch on their favorite soap. Here are four B&B storylines fans want to see.

1. Aly returns from the dead

Since Ingo Rademacher has been recast as Thorne, bringing Aly (Ashlyn Pearce) back from the dead would be a timely move. B&B could reveal that someone mistakenly declared Aly dead. A faint pulse could’ve been found after Steffy (Jacqueline MacInnes Wood) left the scene. Thorne might’ve secretly taken Aly to an exclusive treatment center in Europe and set up a funeral charade.

Can you imagine the fallout that would come from Aly’s comeback? The Forresters would be furious that Thorne lied, but he could claim he did it to spare his daughter more pain. A now mentally stable Aly might be turned away Forrester, so what would she do? Head over to Spectra to start that shoe line she always wanted.

All right. It’s time to stop messing around, B&B. Many Bold and the Beautiful viewers want “CaRidge” back together! Caroline (Linsey Godfrey) is a fan favorite, but her character has kind of been destroyed lately. She lied to Thomas (Pierson Fode) about having a terminal illness and that’s pretty despicable.

Some viewers could never buy Thomas and Caroline as a real pairing anyway. Since Thomas basically raped Caroline when Douglas (Jackson and Leighton Rapo) was conceived, it was tough to buy him as her true love. Maybe it’s time for Ridge (Thorsten Kaye) to let Brooke (Katherine Kelly Lang) enjoy single life. He could reunite with Caroline and give fans the chemistry they’ve been missing.

That brings us to the next story idea on the list. Why not put that awful night to rest entirely by changing Douglas’ paternity? They could reveal Douglas as Ridge’s miracle child and spark some fierce family drama in the process. Douglas is old enough to be attached to Thomas, especially since they’ve been spending so much time together in New York. Could Ridge form a similar bond?

A Thomas recast is probably in the works, so this would be an interesting storyline for his new portrayer. He could sink his teeth into juicy material right away. A stunning medical crisis could lead to the shocker of the century. Grandpa Ridge could be Daddy after all!