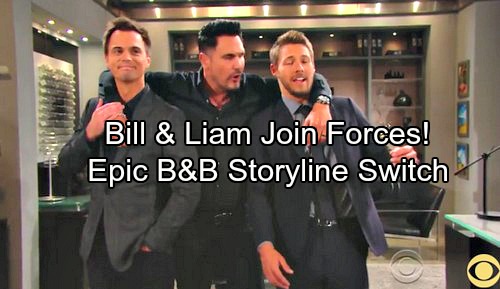 The Bold and the Beautiful spoilers documented the incredible clash between Bill (Don Diamont) and Liam (Scott Clifton). Then, within one of the better episodes of B&B in awhile, Bill handled all devastating recordings Liam made and amazingly, reconciled with his son.

Tears could be seen in both men’s eyes as the climatic events played out. Steffy (Jacqueline MacInnes Wood) again stood as the voice of reason, chiding both her husband and father-in-law. Justin (Aaron Spears) was the other witness to the epic event that unexpectedly unfolded.

Dollar Bill seemed prepared to throw Liam out of the family company and his life forever. Then, B&B’s writers threw a beautifully biting curveball that struck many viewers, (including this scribe) out, looking.

This author was convinced that Liam had secured a physical copy of Bill’s arson admission. Yes, a flash drive existed. But Liam had foolishly taped it under the desk in the CEO’s office. Justin secretly obtained that backup evidence himself and hand-delivered it to his boss, Bill.

Ken’s (Danny Woodburn) technical services had been recommended by Justin. Bill was impatient but also grateful, as Woodburn’s character worked through the night at Bill’s house to remotely negate Liam’s leverage.

Woodburn deserves special mention. This great character actor, whose career began in 1991, previously portrayed a demon elf on NBC’s Passions in 2007 and 2008. He also famously played Kramer’s (Michael Richards) buddy on one of the all-time classic sitcoms, Seinfeld (also on NBC) in the 1990’s.

Liam didn’t know what his dad had stunningly accomplished when Bill and Justin entered what he thought was still his office at Spencer Publications. It appeared as though an ultimate showdown would then take place.

Steffy’s role as an intermediary momentarily seemed to be cast off by Bill after all had been revealed. Liam was mortified and expected his father to follow through on his word to crush him.

Bill and Liam exchanged heated words, but then Diamont delivered a performance that should be submitted on his Emmy reel. Bill killed the ghost of his father’s, Bill Senior (Jim Storm), influence, thanked Steffy for being his confidant and said that he wanted Liam’s forgiveness in return for giving his own. It was immediately offered, along with each man’s statement of love for the other during an embrace.

The request for absolution instantly deepened Diamont’s character. It also simultaneously established many storyline possibilities. Kudos to B&B and all involved for the invention and execution of that truly terrific scene.