The Bold and the Beautiful Spoilers: Bill and Ridge Square Off For A Brawl Over Brooke

BY Sean O'Brien on October 5, 2017 | Comments: 2 comments
Related : Soap Opera, Television, The Bold and the Beautiful 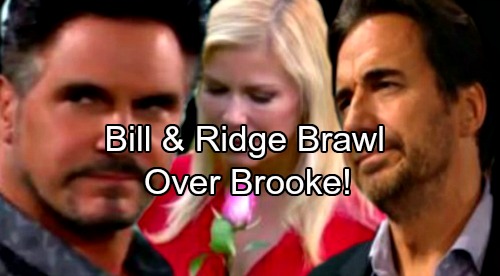 The Bold and the Beautiful spoilers tease that Liam (Scott Clifton) continues to drift toward Sally (Courtney Hope). Both business and personally pound foolish. Meanwhile, Bill (Don Diamont) and Ridge (Thorsten Kaye) are playing a game of one-upsmanship. B&B fans await what might be a fated physical fight.

Liam felt bad because of what his dad did to Spectra Fashions. Unlike most people, Liam took action and deserved credit for that. He boldly ousted his father by secretly recording Bill’s arson confession. Then, Liam emailed a copy to himself in order to prevent Dollar Bill from grabbing and smashing his smartphone.

It really seems as though Liam isn’t actually interested in Sally romantically just yet. While Sally is attractive in a cute sort of way but Steffy (Jacqueline MacInnes Wood) has model genes, just like her mom, Taylor (Hunter Tylo). No rational guy would opt for Sally when Steffy is in love with him. But is Liam thinking straight?

Steffy was naturally miffed when her husband told her that he had invited Sally to an event in San Francisco. Any wife would be bothered by such a trip. Liam didn’t invite Shirley (Patrika Darbo) as Spectra’s representative, now did he?

Meanwhile, Bill has time on his hands. He used some of those moments to pay an unexpected second visit to Ridge.

Both guys look like they could handle each other in a brawl. Who might win is an open question. But the battle for Brooke (Katherine Kelly Lang) is definitely on.

The scenes between Diamont and Kaye are great. Bill’s cocky volleys have been marvelously returned by Ridge. Diamont may be earning Daytime Emmy credits, while Kaye’s passive-aggressive interactions with his on-screen combatant are brisk and textured. Solid actors in their own rights, they have obviously upped their games via said scene collaborations. 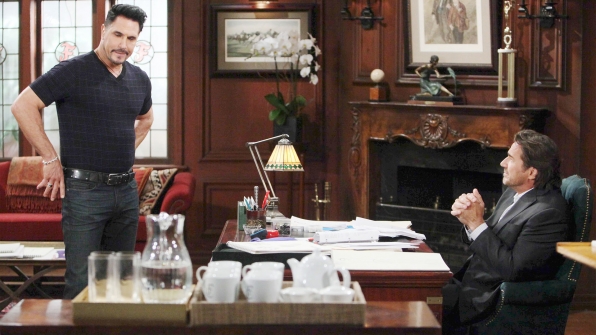 At the moment Brooke is considering Ridge, but hasn’t fully written off Bill. Yes, she took off the statement ring Bill gave her. However, she’s seemed to cool down after exploding and storming back to her own house.

Steffy is lobbying hard on Bill’s behalf for Brooke. But if Liam saw how she was stroking Bill last week he might be as perplexed as his wife is about him and Sally. Steffy hasn’t yet fallen into Bill’s romantic aura, though it’s easy to project Salim (Sally and Liam) and Sill (Steffy and Bill) forming at some future points. Whether one, or both couples result are two reasons why B&B fans will watch their soap.