The Bold and the Beautiful Spoilers: Bill Pulls Wyatt to the Dark Side – Katie Fearful, Wyatt Must Choose Love or Loyalty 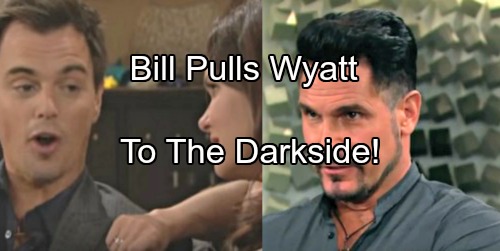 The Bold and the Beautiful (B&B) spoilers tease that Bill (Don Diamont) will need a few favors from Wyatt (Darin Brooks). Justin’s (Aaron D. Spears) in Bill’s corner, but the sinister Spencer could use another ally. Wyatt doesn’t approve of Bill’s dirty tactics, but he’s able to tolerate them. He doesn’t quite have the same moral compass that Liam has.

Bill will take advantage of that as he presses on with his plot. The Bold and the Beautiful spoilers say Wyatt will feel bad about helping Bill take Liam down. Bill will likely insist that they have to protect the Spencer legacy. He believes Liam’s going to run the company into the ground if he can’t regain control.

With that in mind, Wyatt may go along with the plan. Bill might start Wyatt off with small tasks, but the risks could increase as this storyline moves along. When Bill eventually finds out about Wyatt and Katie’s (Heather Tom) relationship, he won’t be thrilled. However, their romance will probably be insignificant in the grand scheme of things.

Bill doesn’t need to worry about his son dating his ex. He’s got bigger problems to deal with. Besides, Brooke (Katherine Kelly Lang) and Steffy (Jacqueline MacInnes Wood) are the only women in Bill’s thoughts right now. As for Katie, she’d much rather have her sexy, younger Spencer.

It sounds like Wyatt and Bill’s partnership will remain intact through it all. Unfortunately, this could be the first major obstacle that Katie and Wyatt face. Quinn (Rena Sofer) isn’t really much of an issue since Wyatt intends to do what he wants. Her recent outburst had no impact on Katie and Wyatt’s love for each other.

Bill may be the one who inadvertently causes trouble. B&B spoilers hint that Wyatt could be pulled to the dark side. Will he start to exhibit some of his father’s dangerous tendencies? That could certainly spark concerns for Katie. Wyatt may eventually be forced to choose between love or loyalty.

This could be a lose-lose situation. If Wyatt stands by his dad and goes too far, Katie could dump him. If Wyatt turns on Bill, he could provoke his father’s wrath and lose Katie anyway. The outcome might brutal for Wyatt no matter what he decides.