The Bold and the Beautiful Spoilers: Dangerous Desires Rock Liam and Steffy’s Marriage – Who Will Cheat First? 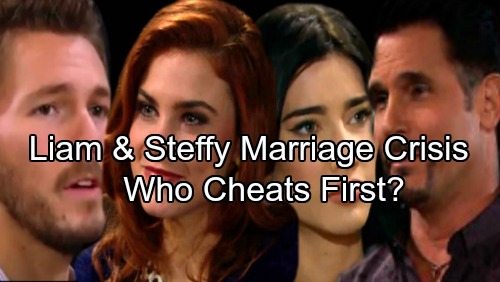 The Bold and the Beautiful (B&B) spoilers tease that temptation is coming up on the CBS soap. It’s clear that some dangerous desires are brewing for Liam (Scott Clifton) and Steffy (Jacqueline MacInnes Wood). B&B is laying the groundwork for infidelity, but who will cheat first? Let’s look at all the factors to figure that out.

First, we have Sally’s (Courtney Hope) little angel. Liam feels like he owes Sally since Bill (Don Diamont) derailed her dreams, but is that the only reason they’re becoming so chummy? Not a chance! Liam may not want to admit it yet, but there’s definitely a spark here. It’s easy to see that Liam is drawn to Sally’s passion and resolve.

Like Sally, Liam trying to rebuild in a way. Spencer Publications may not be recovering from a fire, but there’s still a major transformation taking place. Sally wants to create a better future for her family’s company and Liam understands how that feels. 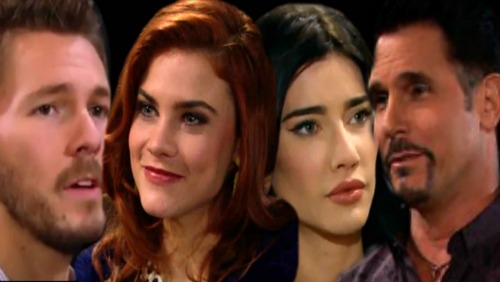 Of course, Sally is awfully vulnerable at the moment. Since Thomas (Pierson Fode) dumped her for Caroline (Linsey Godfrey), falling for Liam is a no-brainer. It shouldn’t be long at all until Sally develops real feelings for Liam. In fact, she probably has them already!

Bill (Don Diamont) is also determined to make Liam pay for his behavior. Stealing Steffy would be the ultimate blow. Liam keeps talking about how there’s nothing Bill could do to hurt him. That’s because he can’t even fathom the idea of Bill stealing his own daughter-in-law!

Nevertheless, Liam needs to start considering it. Bill has certainly been flirty during his recent interactions with Steffy. That trend will continue in the coming weeks. Steffy is the only person on Bill’s side right now, so that’s making his act a piece of cake. Bill could truly love Steffy before all this is over.

The Bold and the Beautiful spoilers say Steffy will find herself leaning on Bill more and more. As Liam drifts toward Sally, Steffy will feel frustrated and alone. She may be tempted to lock lips with Bill or even head to bed with him.

It’s time to place your bets on who will cheat first! Will it be Sally-obsessed Liam or Bill-fixated Steffy? Just how far will they take this betrayal? We’ll give you updates as other Bold and the Beautiful news comes in. Stay tuned to B&B and don’t forget to check CDL often for the latest Bold and the Beautiful spoilers, updates and news.