BY Heather Hughes on November 28, 2017 | Comments: one comment
Related : Soap Opera, Spoiler, Television, The Bold and the Beautiful 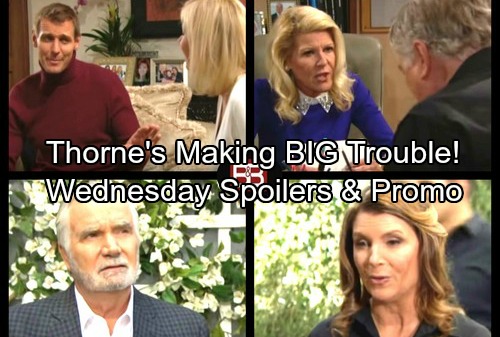 The Bold and the Beautiful (B&B) spoilers for Wednesday, November 29, tease that Eric (John McCook) will be surprised when he runs into Sheila (Kimberlin Brown). He won’t exactly be thrilled that Sheila’s still hanging around town, but she’ll promise she’s not going to make trouble. Sheila will insist that she’s sorry for causing Eric any pain. She’ll feel like her heart was in the right place.

Sheila will add that she just had to make sure Quinn (Rena Sofer) was worthy of Eric’s love. She’ll contend that it’s the one part of her plan she won’t apologize for. Eric will wonder where Sheila stands on the Quinn issue now. She’ll surprise him once more by admitting she’s OK with his relationship. 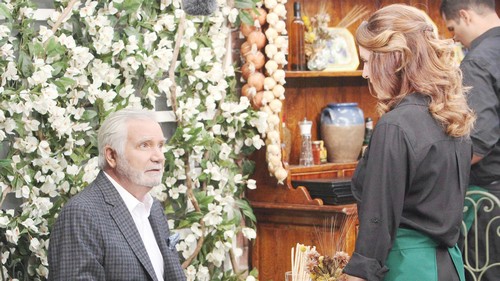 Sheila will suggest that she approves of Quinn’s devotion, but all of this is probably phony. Eric may buy Sheila’s act, but it’s doubtful that she’s really changed her tune. Unfortunately, it appears Sheila’s pulling the wool over Pam’s (Alley Mills) eyes as well.

B&B spoilers say Pam will fill Charlie (Dick Christie) in on their recent chat at Il Giardino. She’ll note that Sheila genuinely seems to want a friendship. Part of Pam may feel bad for Sheila. It’s obvious that Sheila doesn’t have many gal pals and there’s a good reason why. 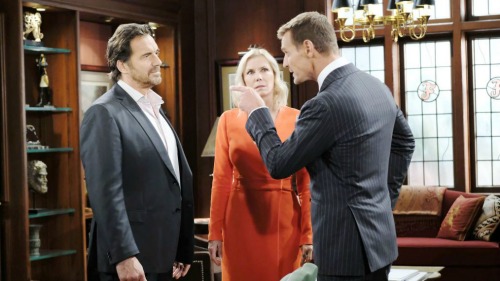 Who could be friends with this sneaky backstabber? It looks like Pam may be leaning in that direction, but Charlie will try to talk her out of it. He’ll argue that befriending Sheila can only mean bad news. Speaking of bad news, Thorne’s (Ingo Rademacher) next revelation could spark turmoil for Ridge (Thorsten Kaye). He’ll tell Brooke (Katherine Kelly Lang) about his shocking business goal.

Thorne has been working on his design skills and he finally believes he’s ready to show his line to Eric. He’ll be confident that he can take the lead at Forrester Creations. The Bold and the Beautiful spoilers say Thorne will also belittle Ridge’s role in the Forrester family. He’ll point out that Ridge isn’t Eric’s biological son, so it’s not clear where his talent comes from.

Brooke may remind Thorne that Eric still showed Ridge the ropes. She’ll do her best to keep the tension to a minimum, but that plan won’t work out for long. We’ll give you updates as other Bold and the Beautiful details emerge. Stick with B&B and don’t forget to check CDL often for the latest Bold and the Beautiful spoilers, updates and news.