The Bold and the Beautiful Spoilers for Next 2 Weeks: Maya’s Evil Baby Plan – Thomas Makes A Choice – Sheila Threatens Charlie

BY Heather Hughes on August 28, 2017 | Comments: one comment
Related : Soap Opera, Spoiler, Television, The Bold and the Beautiful 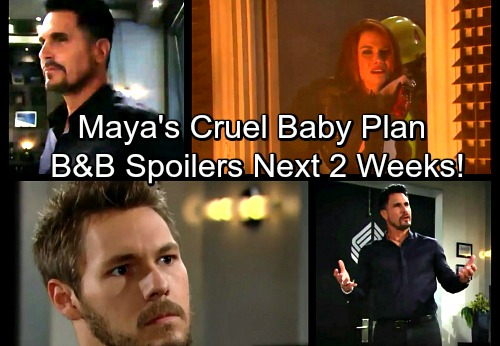 The Bold and the Beautiful (B&B) spoilers for the next two weeks tease that disaster will strike. The week of August 28-September 1 will bring some hot moments. For starters, things will heat up at Spectra as the building burns to the ground. After Sally (Courtney Hope) lands in the hospital, Thomas (Pierson Fode) will return to Los Angeles. He’ll feel terrible about leaving Sally vulnerable.

Bill (Don Diamont) will face the wrath of his son this week as well. Liam (Scott Clifton) will seethe over Bill’s destruction and it could convince him to make a gutsy move. Meanwhile, Eric (John McCook) will catch Quinn (Rena Sofer) and Sheila (Kimberlin Brown) having a full-on wrestling match at the mansion. He’ll break up their brawl and demand an explanation.

Naturally, Quinn and Sheila will blame each other. The Bold and the Beautiful spoilers say Eric will side with one of them, which will create problems for the loser of this battle. It looks like Eric may think Quinn is overreacting.

Once Ridge (Thorsten Kaye) gets updates on the latest drama, he’ll urge Eric to listen to Quinn. Ridge will agree that Sheila poses a risk to the Forrester family. They don’t know what kind of stunt she’ll pull next.

Eric is aware of Sheila’s history, but it’ll be hard for him to believe she’s all bad. After all, Sheila really helped Eric when he was dealing with Ridge and Quinn’s betrayal. B&B spoilers say Sheila will feel like her plan is on track. She’ll think she can keep up the good work and make Eric her husband.

Of course, Sheila has a long way to go and her plot will definitely hit some snags. If Quinn’s going down, she’ll do it kicking and screaming. The week of September 4-8 will deliver more sneakiness. The Bold and the Beautiful spoilers hint that Sheila will prep for another round of chaos. 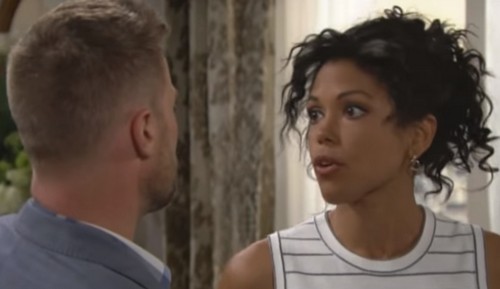 Charlie (Dick Christie) will reluctantly get dragged back into all of this. Sheila will tiptoe into Forrester Creations for a chat with her secret helper. She’ll push Charlie to do her a favor, but it won’t really be a request. What Sheila wants, Sheila gets!

What does Maya have in mind? Does she want to leave town or find a different way to limit Nicole’s time with Lizzie? We’ll keep you posted as other B&B news comes in. Stay tuned to the CBS soap and don’t forget to check CDL often for the latest Bold and the Beautiful spoilers, updates and news.