BY Heather Hughes on December 7, 2017 | Comments: one comment
Related : Soap Opera, Spoiler, Television, The Bold and the Beautiful 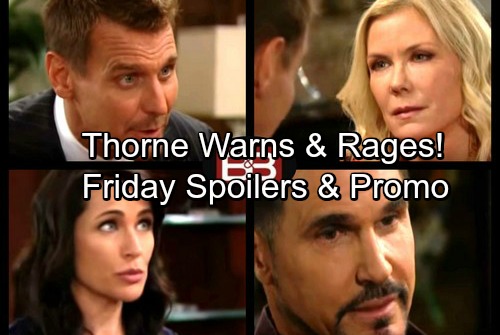 The Bold and the Beautiful (B&B) spoilers for Friday, December 8, tease that Steffy (Jacqueline MacInnes Wood) will meet back up with Bill (Don Diamont) to discuss their secret. She’s having trouble keeping her mouth shut, but she feels it’s her only option. Now that Steffy’s added in total lies, she’s really on edge about all of this.

Nevertheless, Bill will think Steffy can handle the pressure. He’ll suggest that if Steffy believes her story, Liam will as well. Bill will push Steffy to convince herself that nothing happened and just let it go. The Bold and the Beautiful spoilers say Steffy will try, but some major difficulties will come up in the near future.

Elsewhere, Thorne (Ingo Rademacher) will have a serious conversation with Brooke (Katherine Kelly Lang). He’s not pleased about Brooke and Ridge (Thorsten Kaye) growing closer again. Thorne will reiterate that Brooke shouldn’t be Ridge’s wife. He’ll believe she deserves someone who will treat her with the respect she deserves.

Thorne will beg Brooke to walk away before Ridge breaks her heart again. Brooke will seem touched by Thorne’s concern, but she’ll think she can take care of herself. B&B fans know that Brooke doesn’t always make ideal choices when it comes to her love life. However, that doesn’t stop her from jumping back into ill-advised romances. Brooke does what she wants and that’s that.

Ridge and Brooke will get engaged next week, so Thorne’s warning will fall on deaf ears for now. If he wants to break “Bridge” up, Thorne will have to offer more than just lectures. He’ll need a plan, so he’ll probably get to work on that soon enough. 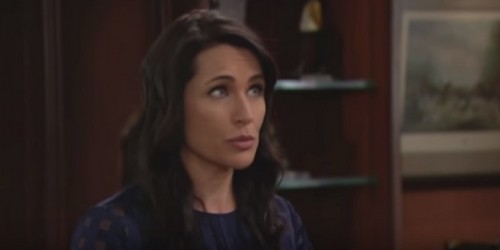 In the meantime, Ridge will feel like everything’s going great. He’ll be convinced that Brooke’s going to spend the rest of her life with him. Quinn (Rena Sofer) will be relieved by the progress Ridge is making. She’ll admit she felt guilty when she lost Ridge lost Brooke forever. Quinn got her happy ending with Eric (John McCook), so she wants Ridge to get one, too.

Later, Thorne will blast Ridge for kissing Quinn during his last engagement. He’ll call his brother out for betraying Brooke and Eric. The Bold and the Beautiful spoilers say they’ll get into a heated argument about what’s best for the woman they both love.

It looks like some excitement’s brewing. We’ll give you updates as other B&B news comes in. Stick with the CBS soap and don’t forget to check CDL often for the latest Bold and the Beautiful spoilers, updates and news.