The Bold and the Beautiful Spoilers: Friday, November 10 – Sally Tries to Get Liam To Lie To Steffy About The Kiss 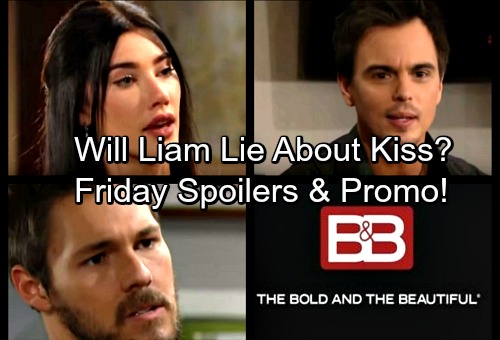 The Bold and the Beautiful (B&B) spoilers for Friday, November 10, tease that Liam (Scott Clifton) will respond to Sally’s (Courtney Hope) difficult request. She understands that Liam wants total honesty in his marriage, but she still doesn’t think he should fill Steffy (Jacqueline MacInnes Wood) in on that kiss. Sally will argue that it would just make their feud worse.

Liam will get why Sally wants to keep it quiet, but he’ll suggest that he can’t do that. The Bold and the Beautiful spoilers say Liam will contend that Steffy has to know what happened. He’ll believe he can convince Steffy that it wasn’t a big deal. They simply locked lips when they thought the end was near.

However, that kiss truly mattered to Sally. Liam matters to her as well. Her growing feelings will be a huge reason why she doesn’t want Steffy in the loop. All of this is becoming quite overwhelming and Sally just won’t be sure how to handle it.

If Liam goes through with his plan, he could be making a terrible mistake. Since Steffy will hook up with Bill (Don Diamont) soon, perhaps she’ll learn the truth and use it as a free pass to cheat. Steffy’s infidelity will be far worse, but Liam set this in motion by cozying up to Sally. Both Steffy and Liam should have some regrets down the road.

For now, Steffy will remain certain of Liam’s commitment to her. She’ll tell Bill that Liam’s loyalty is the one thing she can count on. Bill might ask if Steffy’s trying to convince him or herself. He’ll sense that Steffy’s real feelings don’t line up with the declarations she’s making.

Other Bold and the Beautiful spoilers say Wyatt (Darin Brooks) will mull over all the craziness. He’ll wonder if Bill and Liam can ever make amends again. Wyatt will tell Katie (Heather Tom) that he’s standing by his dad. He’ll feel like it’s the only choice he can make, especially since they have a bombshell of their own brewing.

Katie will make a sacrificial suggestion as she works to make things easier on Wyatt. Perhaps she’ll argue that they should back off until the situation settles down. Of course, B&B fans know Wyatt is smitten and probably won’t agree to that. He may think they can keep their secret romance going until the time is right to go public.

There’s a good chance Bill will eventually find out in a shocking way, but his reaction may be equally surprising. We’ll give you updates as other B&B news comes in. Stick with the CBS soap and don’t forget to check CDL often for the latest Bold and the Beautiful spoilers, updates and news.