The Bold and the Beautiful Spoilers: Friday, November 3 – Spectra Blows Up, Liam and Sally at Risk 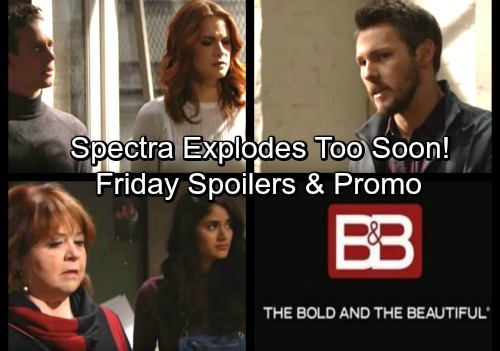 The Bold and the Beautiful (B&B) spoilers for Friday, November 3, tease that Steffy (Jacqueline MacInnes Wood) will grow increasingly concerned about Liam (Scott Clifton). Unfortunately, Wyatt (Darin Brooks) probably won’t do much to reassure her. He’ll agree that Liam could be in grave danger.

Steffy will open up about all her frustation. She just won’t understand why Liam insists on putting his life on the line for Sally (Courtney Hope). Wyatt might point out that Liam always has to save damsels in distress. When someone’s been wronged or faces a crisis, Liam can’t resist playing the hero.

Steffy will hope that Liam comes to his senses before this gets out of hand. If not, she’ll hope that Bill (Don Diamont) will at least remain in control of the situation. Steffy certainly won’t have a good feeling about the day’s events. Wyatt won’t exactly be optimistic either. They’ll both realize that Liam is playing with fire.

Meanwhile, Liam and the Spectra gang will refuse to back down. The head of demolition will give them a final warning, but Sally and Liam will promise that they’re staying put. The Bold and the Beautiful spoilers say Justin (Aaron D. Spears) will give Bill updates on what they’re dealing with. He’ll contend that nothing seems to be working. 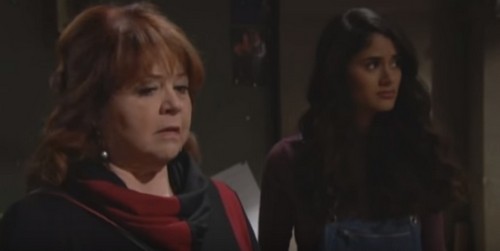 Bill ordered his crew to cut the power, but that won’t affect the Liam and Sally’s goal. They’ll stand their ground and try to believe that their plan will pay off. B&B spoilers state that Bill will get more and more agitated. He’ll just want his son and the fashion mogul wannabe to clear out.

Later, Justin will learn that Sally and Liam still aren’t budging. He’ll send Bill a text about the resistance, but there’ll be some catastrophic confusion. For some reason, Bill will assume that Liam and the Spectra staff left the premises. He’ll press a button that destroys the building, but regret will quickly follow.