The Bold and the Beautiful Spoilers: Hope’s Surprise, Returns for Wyatt Not Liam – Katie Jealous as Exes Reconnect

BY Heather Hughes on November 26, 2017 | Comments: one comment
Related : Soap Opera, Spoiler, Television, The Bold and the Beautiful 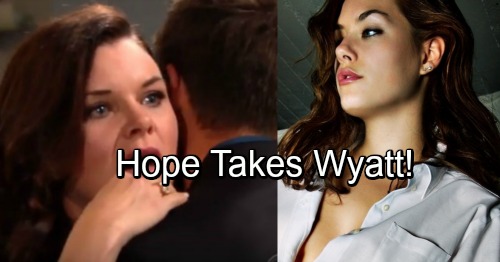 The Bold and the Beautiful (B&B) spoilers tease that Hope’s (Annika Noelle) return will really shake things up. Steffy (Jacqueline MacInnes Wood) is currently keeping a secret that could end her marriage. Sally (Courtney Hope) still has the hots for Liam (Scott Clifton), so she remains a player in this storyline as well. It’s clear that Liam already has his hands full when it comes to women.

Many B&B fans assume Hope will join the Liam fan club again, but what if she’s back for someone else? Wyatt (Darin Brooks) stands just as much of a chance with their mutual ex. Perhaps Hope will arrive as some competition for Katie (Heather Tom). This could be a true test of Wyatt’s loyalty!

The Bold and the Beautiful spoilers say Wyatt and Katie will continue their sexcapades. They’re enjoying their bedroom romps and a few more characters should find out soon. The drama should be fun, but what happens next? The latest info hints that Katie and Wyatt won’t take this much further just yet. They want to take advantage of this wild ride without the pressure of a real commitment.

Maybe that’s how B&B will leave the door open for Hope this January. At some point, Katie may realize a future with Wyatt isn’t ideal. They may not be on the same page about having kids or where they envision themselves years down the road. The age gap could become a bigger issue as time goes on.

As Katie resists the next phase of their romance, Hope could show up in town. Naturally, Wyatt will take some time to chat with her. It could start off as old friends catching up, but it could easily turn into something more.

Hope is undoubtedly single and ready to mingle, so she may be interested in reconnecting with Wyatt. That’s especially true since Liam’s taken at the moment. Wyatt is B&B’s faithful backup boyfriend. If Liam’s unavailable, Wyatt tends to be waiting as the consolation prize.

Of course, everything could change once Liam and Steffy’s marriage explodes. You can bet that Hope will go sniffing around Liam after that. Wyatt might regret giving up on Katie so easily. Likewise, Katie’s jealousy could be enough to push her into a full commitment.

It sounds like there could still be a chance for Wyatt and Katie to make it work. They’ll just have to survive Hope’s long-awaited comeback! We’ll give you updates as other Bold and the Beautiful news comes in. Stick with the CBS soap and don’t forget to check CDL often for the latest Bold and the Beautiful spoilers, updates and news.

I have so much to be grateful for on this Thanksgiving! I am so excited to be joining the @boldandbeautifulcbs family as Hope Logan. I am already overwhelmed with the amazing love and support, you all are the best! Have a happy Thanksgiving!!! #thankful