BY Sean O'Brien on November 6, 2017 | Comments: one comment
Related : Soap Opera, Spoiler, Television, The Bold and the Beautiful 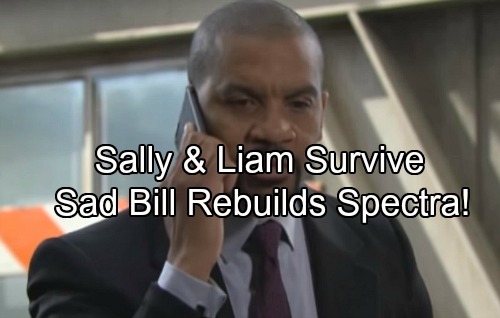 The Bold and the Beautiful spoilers tease that Liam (Scott Clifton) and Sally (Courtney Hope) actually achieved results through their ill-fated sit-in. Even though the Spectra Fashions’ building unexpectedly collapsed on them, their survival will result in Bill (Don Diamont) agreeing to help Sally’s company rebuild.

Justin (Aaron Spears) eye-witnessed the Brat Pack (Liam, Sally and her three minions) exiting the supposedly meaningful building. So Bill was given the go-ahead to flip the demolition switch.

As that was happening, Liam and Sally agreed to head back inside. The resulting collapse would have killed most people. But this pair survived because they’re oh so soapy.

Fans of 1980’s entertainment know that the Brat Pack reference refers to eight Hollywoodland actors (Rob Lowe, Demi Moore and others) who were fixtures in various movies three decades ago. That group was a wink at Lauren Bacall and Humphrey Bogart’s group of friends, the Rat Pack, who cavorted in the 1950’s and later, the Frank Sinatra-led consortium of 1960’s party people. The comparison to B&B isn’t meant to be exact, but it’s cheeky and therefore good enough.

Yes, some human beings survive when buildings collapse. But to think that nothing hit either character on the head, or crushed whatever parts of either person’s body was really a stretch, even for B&B. However, devotees of CBS’s daytime drama (dramedy?) are holding their noses in hopes that a believable storyline unfolds now.

All reasonable minds, both in this faux Los Angeles world and on the other side of the screen, saw Bill’s plan to pay for Spectra Fashions move as acceptable. He even had all of Sally’s corporate belongings moved before the blast occurred. But Liam said that was good enough, stomped his feet and convinced the rest of the Brat Pack to stay put. The minions were scared off, but Sally stood her ground aside Liam.

Clifton’s character and Sally crossed a line prior to their rescue when they locked lips on two different occasions. Plenty of fans who are attracted to one character or the other may have done the same if they were facing imminent death.

Knowing Liam as everyone does, he’ll surely be conflicted and feel compelled to tell Steffy (Jacqueline MacInnes Wood) what happened. He’d be smarter to keep those kisses buried under the rubble and focus on his wife, unless of course he does have a thing for the hot redhead as Bill initially suspected.

And who called Sally by that nickname this week? Yes, it was Liam while he and Hope’s character were lying aside of each other in a set that was skillfully crafted.

Bill will do the right thing after Liam and Sally are attended to. He’ll help Spectra Fashions to survive. But Sky can now be built as well.