BY Sean O'Brien on November 1, 2017 | Comments: one comment
Related : Soap Opera, Spoiler, Television, The Bold and the Beautiful 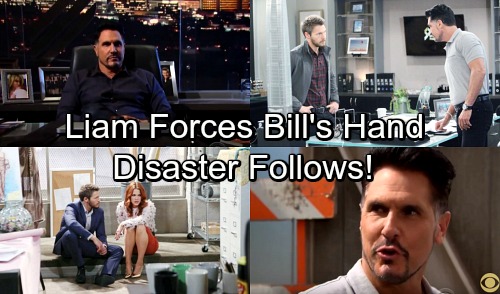 The Bold and the Beautiful spoilers documented Liam’s (Scott Clifton) recent rightful stance against his father. Bill (Don Diamont) was wrong to have ordered arson and to have punched his son. However, now that those issues have been addressed and both men agreed to work with each other Liam, not Bill, is proving to be the more stubborn man.

Bill is not being unreasonable, as Wyatt (Darin Brooks) has tried to impress on his brother. Spencer Publications owns the property where Spectra Fashions is operating. Liam didn’t conduct due diligence and had no legal standing when he thought he gave Sally (Courtney Hope) the deed to that prime downtown Los Angeles space. That was another instance where Liam’s real word inexperience was revealed.

The more Liam protests Bill’s plans the more he looks like a bratty child. Why would Sally and her team need to specifically operate out of the current property in order to be successful? Spectra Fashions doesn’t rely on foot traffic to sell its products. Bill’s offer to relocate Sally’s family business and to help pay for her moving costs makes sense on many levels.

B&B fans have also taken notice that Liam hasn’t actually asked Sally what she thinks of Bill’s plan. He’s assuming that she shares his thoughts and would also passionately reject the offered alternatives.

Liam’s presumptions reconfirm Bill’s point about his son being overly righteous. Yes, Liam lives in his own idealistic world. That’s a personality point, rather than adherence to a justifiable ideology. Liam appears unable, or incapable of accepting another person’s opinion that differs from his own. 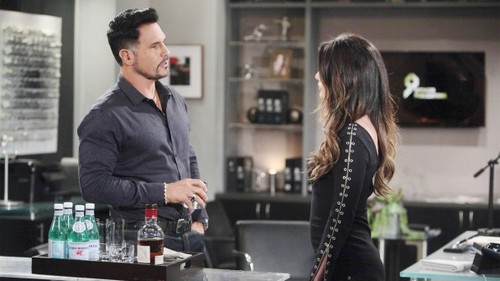 As a last resort, Liam did tell Bill that Spectra Fashions should be allowed to remain where it is for a year. The Spencer trio could also opt to invest in Sally’s business as well. If Sally wasn’t able to make progress, than her building could be demolished and Sky would rise.

The logic flaws in the last paragraph are obvious to all reasonable minds. Liam didn’t ask his father, he told him and he called the building Sally’s, when it’s not.

Just because Bill was wrong doesn’t justify Liam believing that he’ll now be right all the time. This naive young man also appears to have convinced himself that he must teach his dad everything. That’s partially Bill’s fault for having told Liam that he wants to learn from him.

Yes, an adjustment period is underway. Both men had a major blowout and are now learning how to co-exist. Hopefully they can.

Bill’s power-share arrangement isn’t bogus, as he’s agreed to keep many of Liam’s proposed corporate changes. However, the building Spectra occupies will be demolished. Then devoted viewers will see if Liam tries to stop his dad from building the desired legacy skyscraper.