The Bold and the Beautiful Spoilers: Liam’s A Lightweight – Sheila To Use Kidnapping and Violence

BY Sean O'Brien on August 30, 2017 | Comments: one comment
Related : Soap Opera, Spoiler, Television, The Bold and the Beautiful 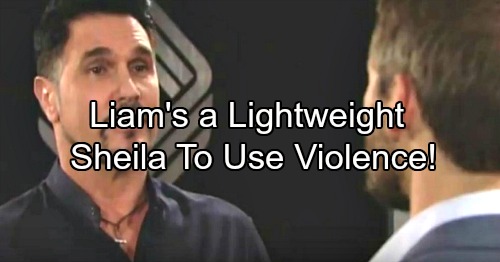 The Bold and the Beautiful spoilers tease that Liam (Scott Clifton) needs to take his heart off his sleeve. Meanwhile, across town, Sheila (Kimberlin Brown) is living in a fantasy world as she considers her next move.

Bill (Don Diamont) stunned his son. He actually admitted to having ordered the torching of the building where Spectra formerly lived. Yes, Dollar Bill killed that company with his arson request and Liam couldn’t be more sickened by his father’s depravity.

Liam has long been seen as the do-gooder who just doesn’t get it. Bill believes that his son’s so-called principles have been built off the lifestyle that he’s provided for him. That existence reigns because of Bill’s perceived bold moves, which built and maintains the family empire.

Sky will rise because Bill’s vision is single-minded. He’s a job-creator who doesn’t mind stepping on toes, or breaking them. That’s why he told Liam to keep his mouth shut or get out and never return.

Yes, that purposely slanted look at Bill Spencer is written by B&B to openly slam capitalism and the males who are seen as marauders. Cartoons are easy to create in Hollywoodland, which brings us to Miss Carter.

Sheila appeared to be making progress. She reintroduced herself to Eric (John McCook) and his family and managed to gain her former husband’s sympathy. By gosh, she was even living in his guest room until this week.

Quinn (Rena Sofer) is fierce, but she also fears Sheila. Mrs. Forrester knows that Eric’s former wife is stark raving mad. But at least she was able to finally convince Eric that it was far too dangerous to allow Sheila to remain in their home.

The touchingly eerie scene that played out after Eric told Sheila to leave the mansion may signal what comes next. There she stood in the robe Eric allowed her to wear while she was recovering from a mild concussion, thinking about her portrait hanging above the mantel at the Forrester estate.

The problem with Sheila’s vision is that it occurred while she was actually in her hotel room. She’s busted the modicum of respect that was regained with Eric and now is forced to alter her game plan.

Sheila said that she’s going to protect Eric from Quinn. That likely means some type of plot will be carried out using pressured pigeons like Charlie (Dick Christie), James (Ian Buchanan) and other former characters who were part of Sheila’s past.

Blackmail, kidnapping, violence, possibly the demise of one, or more side characters will surely follow whatever dastardly plot(s) Sheila dreams up. Eric will almost certainly never be her bridegroom again. No, he’s destined to become the main victim of her intended love. CDL is a leading source for everything linked to The Bold and the Beautiful. Check back regularly for B&B spoilers and news!