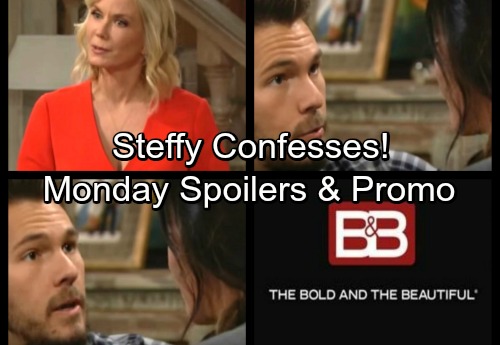 The Bold and the Beautiful (B&B) spoilers for Monday, December 4, tease that Steffy (Jacqueline MacInnes Wood) will be on the verge of spilling everything. She just broke down in tears and shouted that this was about Liam’s (Scott Clifton) father. Naturally, Liam will push Steffy to calm down and tell him what’s going on. He’ll want to know how Bill’s (Don Diamont) involved in Steffy’s despair.

However, Bill’s warning will soon ring in Steffy’s ears. She won’t be able to risk losing Liam over her betrayal. The Bold and the Beautiful spoilers say Steffy will have to think fast and come up with something Liam will buy. She’ll offer some fibs in hopes of covering up her partial confession.

Later, Steffy will meet back up with Bill and confirm that their secret is safe. She’ll note that she couldn’t go through with it. Steffy is determined to protect her marriage and if that means lying forever, she’ll be willing to do that. A relieved Bill will assure Steffy that she did the right thing. He’ll reiterate that telling Liam would only lead to more pain for all of them.

B&B spoilers state that Bill and Steffy will reach an agreement. They’ll officially put the past behind them, but there’s no way they can hide the truth forever. Steffy cheated with her father-in-law, so she’ll have to pay the price eventually. Likewise, Bill deserves to go down for making moves on Liam’s wife.

While Steffy and Bill squirm, Brooke (Katherine Kelly Lang) will confront Ridge (Thorsten Kaye). She’ll also have a betrayal on her mind, but she’s got it all wrong. Brooke overheard Ridge calling Quinn (Rena Sofer) beautiful – or so she thought. In reality, Ridge was just complimenting Quinn’s latest jewelry collection. He’ll explain the situation and hope that Brooke believes him.

Ridge will assure Brooke that his interest in Quinn is over. Brooke is the only one he wants now. It looks like she’ll sense Ridge’s sincerity. They should get over this little bump in the road, but another hurdle is coming up. Ridge won’t be happy when he learns Thorne (Ingo Rademacher) is living with Brooke.

However, Brooke may point out that trust goes both ways. If Ridge wants to win her back, he needs to accept that she cares about Thorne. Brooke’s allowed to have friends of the opposite sex. Of course, Ridge still has a reason to worry! Thorne is definitely a threat, so Ridge will have to keep an eye on him.