The Bold and the Beautiful Spoilers: Quinn Forms a Sneaky Plan – Brooke Rats Out Bill To Ridge 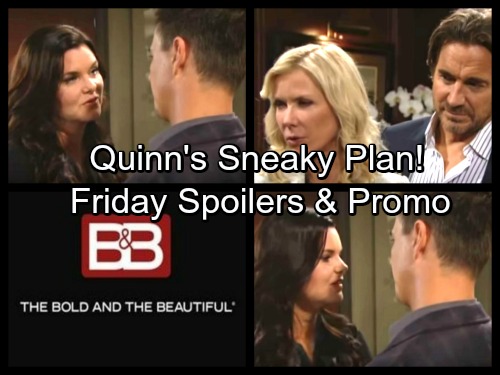 The Bold and the Beautiful (B&B) spoilers for Friday, October 13, tease that Quinn (Rena Sofer) will form a sneaky plan. She’ll decide to spring something on an unsuspecting Wyatt (Darin Brooks). B&B fans know that Quinn usually finds a way to meddle in her son’s love life. She can’t stand the idea of Wyatt being alone for too long, so she’ll make a move to prevent that.

Quinn will start looking around for Wyatt’s perfect match. She’ll assume that there must be some lovely lady who would adore a man like him. The Bold and the Beautiful spoilers say Quinn will insist on setting up a date for Wyatt.

Of course, Wyatt will be against that plan if he finds out about it. He’ll want Quinn to focus on her own relationship, but she’ll grow increasingly curious about what he’s hiding. Next week, October 16-20, Quinn will catch Wyatt in bed with Katie (Heather Tom), so she’ll know what’s up soon enough.

Wyatt will also have a chat with Katie (Heather Tom) in Friday’s episode. The Bold and the Beautiful spoilers state that Bill (Don Diamont) and Brooke’s (Katherine Kelly Lang) problems will come up. Katie will point out that other men always end up being a footnote in Brooke and Ridge’s (Thorsten Kaye) love story. She’ll argue that “Bridge” is meant to be, so Brooke’s other relationships are destined to fail.

Elsewhere, Brooke will decide to open up a bit. She’ll have a few things to get off her chest since she just chose the path of divorce. Ridge will indicate that Brooke is doing the right thing, but she’ll confess that it’s still painful. Brooke will offer a clue about why she left Bill, but she won’t reveal that whole ugly story.

Ridge will understandably be interested in the details, but he won’t push too hard. As long as Ridge has a shot at getting Brooke back, that’s all that matters. Brooke will suggest she doesn’t know what the future holds, but she had to end her marriage to Bill. She just couldn’t take his ruthless behavior anymore. Bill scares Brooke now and she can’t live that way.

It’ll take some time, but it sounds like a reunion could be brewing for Brooke and Ridge. We’ll give you updates as other B&B news comes in. Stay tuned to the CBS soap and don’t forget to check CDL often for the latest Bold and the Beautiful spoilers, updates and news.