The Bold and the Beautiful Spoilers: Sheila Sets a Trap, Eric Catches Katie and Wyatt 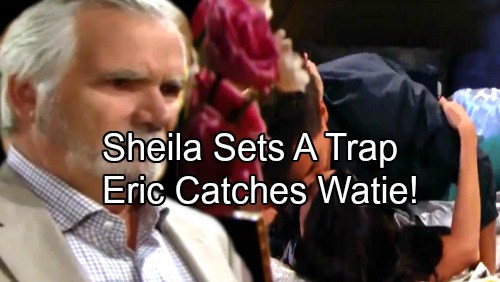 The Bold and the Beautiful (B&B) spoilers tease that Sheila (Kimberlin Brown) will realize she needs a job. She obviously wants money to support herself until she can live off Eric’s (John McCook) massive fortune. However, Sheila doesn’t want just any old position. She wants one that aid her ultimate goal.

Sheila will decide to seek employment at Il Giardino. This outdoor restaurant is near Forrester Creations, which means Sheila can stay close to Eric. As a bonus, Sheila can keep tabs on all the B&B characters who pop in. She’ll don an apron and get to work as a waitress.

Since Sheila has quite a temper, she may have a tough time serving people. Finicky customers should drive her up the wall. Nevertheless, Sheila will try to keep her eye on the prize. She’ll hope that she won’t have to take orders and refill drinks for long. 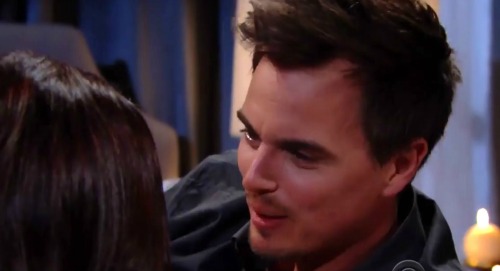 The Bold and the Beautiful spoilers say Sheila will get a chance to stir up trouble soon. She’ll find out a juicy secret almost immediately. When Wyatt (Darin Brooks) and Katie (Heather Tom) stop by for a meal, it’ll be easy to see that they’re falling in love. They’re at that stage where it’s hard to hide their feelings.

Sheila will pick up on the romantic vibe between them, so she’ll choose to make a mess of things. The Bold and the Beautiful spoilers state that Sheila will set a trap for the lovers. She’ll make sure Eric catches them in the act.

It turns out Sheila’s plan will work like a charm. Eric will be stunned when he finds Katie and Wyatt in a compromising position. Once the shock wears off, Eric will probably indicate that he’s happy for them. After all, Eric knows what it’s like to fall for someone unexpected. He can’t judge anyone else when Quinn’s (Rena Sofer) in his bed.

After Wyatt and Katie explain everything, Eric will learn he’s the only person in the loop. B&B spoilers say Eric will be asked to keep this huge news from his wife. Wyatt will worry about how Quinn might react.

Eric may point out that Quinn will have to find out sooner or later. Still, he’ll agree to keep this on the down low for now. Of course, Sheila will inevitably rub this in Quinn’s face. This secret is destined to explode and the aftermath could be tricky.

It sounds like some fun scenes are on the way. We’ll give you updates as other details emerge. Stick with the CBS soap and don’t forget to check CDL often for the latest Bold and the Beautiful spoilers, updates and news.