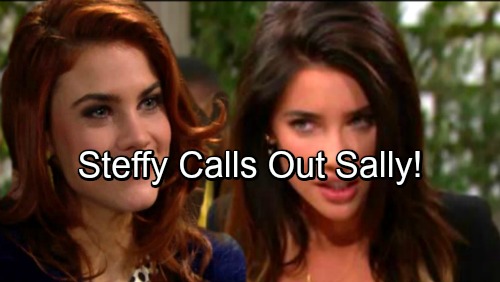 The Bold and the Beautiful spoilers tease that Steffy (Jacqueline MacInnes Wood) nailed what Sally (Courtney Hope) and Liam (Scott Clifton) are both doing. Each is pursuing never-obtainable goals.

Steffy doesn’t believe that anything is happening romantically between her husband and the redhead. But she knows that Sally is playing the poor-little-me victim role to the hilt. Mrs. Forrester-Spencer is also wise to Liam’s pursuit of windmills, which ties directly into Sally’s excessive good fortune.

Okay, so Bill (Don Diamont) ordered arson. He is responsible for Spectra Fashions no longer being in business and hasn’t face arrested. That’s unjust. He should be arrested, convicted and jailed.

What’s not justified is Liam anointing himself a caped crusader who picks and chooses winners. Entitled rich kids, who never truly grew up are often selective in their outrage and supposed societal solutions.

Liam let’s his dad skate, but believes that’s balanced by helping Sally? No, he’s not justified.

Steffy is many things. Despite the appearance of too much facial surgery, she’s still gorgeous and is also wise. MacInnes Wood’s character never faced the type of adversity that Sally referenced. However that tag was thrown as a red herring by Sally and was intended to shift the subject from herself.

People like Sally want to claim that people like Steffy have lived lives of so-called privilege. But the Sally’s of the world are only experts on their own lives. They are not experts on the life of any other person, or group, but regularly throw that spit pitch.

Sally also counts on people like Liam feeling false guilt. Why is his guilt false? Well, he didn’t force Sally to break the law in the past and now is choosing to believe that she’s gone straight simply so that he can right her life. That’s not help, it’s enabling.

B&B fans know that Sally’s claim of being downtrodden was an attempt to silence Steffy’s logic. Yes, Sally tried and failed to block Steffy’s free speech in order to control the narrative. Manipulation is an classic song that many cover when needed.

Steffy used logic by asking Sally if she’d take jewelry from Liam if he offered it to her. Sally said no. So why did she accept money and a free building without insisting that a repayment plan be legally formalized?

Sally is grateful. That’s not in dispute. But her choice to accompany Liam to San Francisco was knowingly wrong. She knows Liam is rich, doesn’t care how he came to have the money and is totally okay with taking his big-egoed gifts.

Steffy was right to call out her husband and his muse. She must remain focused on him because if she doesn’t there’s no telling what cause he’ll rationalize next.