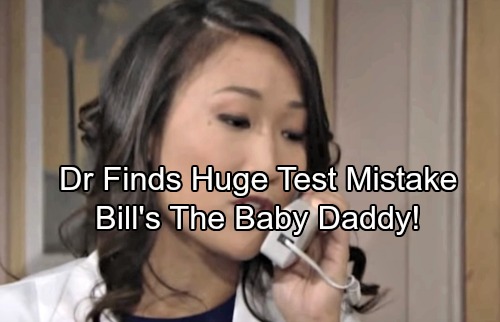 The Bold and the Beautiful (B&B) spoilers tease that some shockers are coming up for Steffy (Jacqueline MacInnes Wood). She’s been terrified over her child’s paternity, but she’ll soon think she caught a lucky break. Next week, the doctor will deliver the test results. Steffy will be relieved when those results point to Liam (Don Diamont) as the “baby daddy.”

Unfortunately, it looks like the doctor may make a huge error. The Bold and the Beautiful spoilers say she’ll study the results a little more and reach a surprising conclusion. The similar DNA pattern will catch the doc off guard. Since Liam is Bill’s (Don Diamont) son, their samples will obviously resemble each other in some ways. Perhaps the doc won’t take a close enough look before she fills Steffy in.

That could lead to some catastrophic confusion. B&B spoilers reveal that somebody will have to correct a major blunder. It might be the doctor who has to backtrack on the paternity test results. Steffy will believe she’s put her betrayal in the rearview mirror, but this news could throw her right back into trouble.

Bill clearly believes the child should be raised by his or her biological father. What will Steffy do if the doc tells her she was wrong? Will Steffy try to hide this fact from Bill? After all, Steffy will have already told Bill by then. She may have shown him the proof that pointed to Liam.

That might be enough to keep Bill at bay for a while, but the truth will inevitably come out. If Bill learns Steffy tried to pass off his kid as Liam’s, he could fly into a rage. Bill might decide to spill everything to Liam and make Steffy pay. He can get pretty ruthless when people turn against him.

What a great ending to the perfect holiday. #BoldandBeatuiful pic.twitter.com/gV4Z9t2Gfn