The Bold and the Beautiful Spoilers: Thorne Back on a Mission – Ridge’s Career and Love Life in Jeopardy, Brother Battle Begins 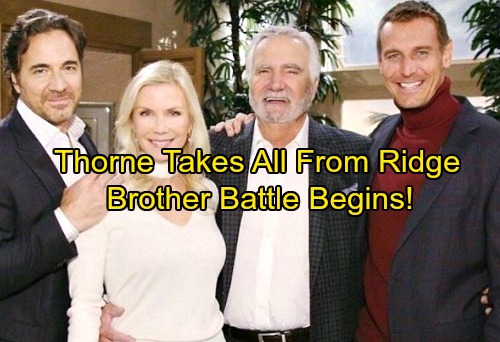 The Bold and the Beautiful (B&B) spoilers tease that Bill (Don Diamont) will make a huge mistake. He’ll blow up the Spectra building and destroy any last bit of hope with Brooke (Katherine Kelly Lang) in the process. Liam (Scott Clifton) and Sally’s (Courtney Hope) lives will be on the line thanks to this explosion, so Brooke will turn her back on Bill for good.

Ridge (Thorsten Kaye) will be ecstatic when his competition is officially eliminated. He’ll think he just needs to be patient and show Brooke the love she deserves. Ridge will feel confident that he can win Brooke over sooner or later. He’ll assume that nothing is going to stand in the way of his happiness.

However, an unexpected obstacle will emerge. The Bold and the Beautiful spoilers state that Thorne (Ingo Rademacher) will suddenly return to Los Angeles. Ridge and the rest of the Forrester clan will be quite surprised. They’ll wonder why Thorne’s in town and how long he plans to stick around. 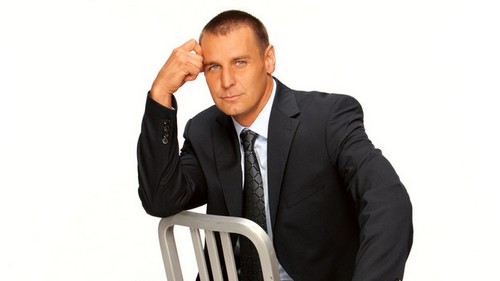 Thorne will insist that this isn’t just a brief visit. He’ll inform the whole family that he’s moving back to LA. B&B spoilers say Thorne will want to get a few things straight with Ridge. He’ll suggest that he’s tired of being muscled out by his half-brother.

Ridge isn’t even a real Forrester, so Thorne won’t see why he should be get preferential treatment. Plus, Ridge had his lips all over Quinn (Rena Sofer) not too long ago. Eric (John McCook) forgave Ridge, but Thorne may not agree with that decision. He’ll feel like Ridge has taken whatever he wants for far too long.

The Bold and the Beautiful spoilers say Thorne will think it’s his turn to do some taking. It’s been a while since we saw major shakeups at Forrester Creations. Perhaps it’s time for some changes at the top.

Will Thorne make shocking power plays and attempt to take the CEO spot? It seems likely considering the mindset Thorne’s coming back with. In fact, Thorne could attempt to steal something else as well – like Brooke’s heart.

Some serious sibling rivalry is in the works! Will Thorne achieve his goals? Does Ridge deserve the drama that’s brewing? We’ll give you updates as other B&B news comes in. Stay tuned to the CBS soap and don’t forget to check CDL often for the latest Bold and the Beautiful spoilers, updates and news.